The Gunners, who had a rough start to the season, finally look to be in some sort of good form as they are heading into this contest on the back of two back-to-back wins in the Premier League against Norwich City and Burnley respectively. They would aim to put up a performance similar to that of their 6-0 demolition of West Brom earlier in the Carabao Cup. 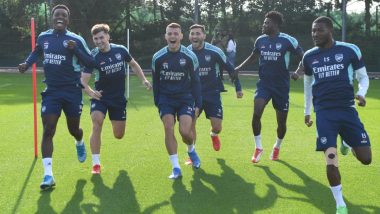 Arsenal would host AFC Wimbledon in the Carabao Cup on Thursday, September 23 at the Emirates Stadium. The match would begin at 12:15 pm IST (Indian Standard Time). After a poor start to the season where they lost three matches and conceded nine goals without scoring any, the Gunners have finally started to gain some momentum as they came out victorious in their last two Premier League fixtures, against Norwich and Burnley, respectively. Though they won both the matches by a 1-0 margin, Mikel Arteta's men have kept clean sheets in all of those contests and are looking to once again dominate the opposition in the Carabao Cup on Thursday. The Gunners scored a dominant 6-0 win over West Brom in their last match in this competition. For Arsenal, star kid Charlie Patino could make his much-anticipated first-team debut after impressing with his performances in the youth team. Cristiano Ronaldo Gives His Shirt To Steward After Accidentally Hitting Her During Warm-Up Ahead of Manchester United vs BSC Young Boys in UEFA Champions League 2021–22 (Watch Video)

It would also be interesting to see whether Arteta continues with new signing Aaron Ramsdale at goal, given the fact that the English keeper has had a lot of work to do in the Premier League recently. Bernd Leno, who is fresh and has not played any game since the international break, might just get the nod and a solid performance from him can possibly ensure that he starts between the sticks in the North London derby against Tottenham on September 26.

Arsenal vs AFC Wimbledon third-round match in Carabao Cup 2021-22 will be played at The Emirates stadium. The EFL Cup match will take place on September 23, 2021 (Thursday mid-night) and is scheduled to start at 12:15 am IST (Indian Standard Time).

Where to Watch the Live Telecast of Arsenal vs AFC Wimbledon, Carabao Cup 2021-22 Football Match in India?

The Arsenal vs AFC Wimbledon EFL Cup 2020-21 match will also be live on online platforms. Fans can log onto Voot Select to catch the live-action of the game either on the website or the app.

(The above story first appeared on LatestLY on Sep 22, 2021 10:49 PM IST. For more news and updates on politics, world, sports, entertainment and lifestyle, log on to our website latestly.com).