Mikel Arteta's side is set to be without the trio of Takehiro Tomiyasu, Martin Odegaard and Emile Smith Rowe for this important clash. Chelsea have already qualified for the final of the Carabao Cup 2021-22 after beating Tottenham in both legs of the semifinal. 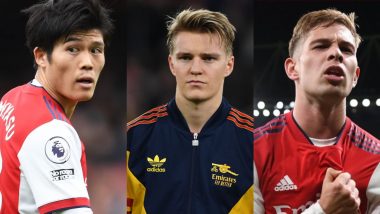 Arsenal have been dealt with three injury blows ahead of their much-awaited clash against Liverpool in the semifinals of the Carabao Cup 2021-22 on Friday. The Gunners are set to be without both their creative playmakers--Emile Smith Rowe and Martin Odegaard for this clash. Smith Rowe is yet to recover from the groin injury he had suffered which made him miss Arsenal's FA Cup clash against Nottingham Forest, a match which the Gunners ended up losing. It has been reported that he is still recovering and hence, is out of this very important clash at Anfield. Liverpool vs Arsenal, Carabao Cup 2021–22 Live Streaming Online: How to Watch Free Live Telecast of EFL Cup Semifinal Leg 1 Match in Indian Time?

Adding to that Odegaard, who missed training on Thursday, looks set to miss out on this game. The Norway captain has been sensational for Arsenal this season so far, ever since making a permanent transfer move to North London from Real Madrid in the summer transfer window. With the Odegaard-Smith Rowe duo out of contention, Mikel Arteta would indeed be in a fix to solve Arsenal's midfield crisis with two of his main players missing. Adding to this, he is also set to be without right-back Takehiro Tomiyasu. The Japanese defender is currently recovering from a calf injury.

However, Granit Xhaka has recovered and is set to return to the lineup, something that Arsenal fans would be happy about. The Gunners would try their best to restrict this Liverpool side who are a very strong outfit at home. The second leg of the Arsenal vs Liverpool Carabao Cup 2021-22 semifinal would be played on January 21.

(The above story first appeared on LatestLY on Jan 13, 2022 08:04 PM IST. For more news and updates on politics, world, sports, entertainment and lifestyle, log on to our website latestly.com).