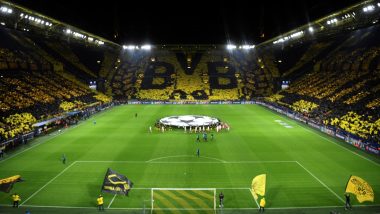 German football giants Borussia Dortmund have taken a huge step in promoting women’s football in the country as they are set to form a women’s team from the 2020-21 season onwards. The newly formed club will start in the lower league of the German league football system, with hopes of making it into the top-tier competition as soon as possible. The women’s team will carry the club’s name. Jadon Sancho Transfer News Latest Update: Manchester United Make Progress in Pursuit of Borussia Dortmund Star.

According to a recent report from DW Sports, in a letter sent to the club members on Thursday, Borussia Dortmund announced their intention to form a women’s team ahead of the 2020-21 season. The Black and Yellow’s follow the footstep of their cross-town rivals Schalke, who also declared their intentions of starting a women’s team earlier in the year.

Borussia Dortmund will register a women's team carrying the club's name, beginning from 2021/22.#BVB will start in the eighth division with a view of making it to the Bundesliga in ten years.https://t.co/ukIMboqLRp

The newly former Borussia Dortmund women’s team will enter at the Kreisliga B level in Westfalen, the eighth tier of German women's football, with the aim being to get BVB in the Bundesliga within the first ten years. Dortmund were the only remaining team among the top 16 men's sides in Europe without a women's team.

Women’s team from Germany have been on the rise in recent season with Wolfsburg carrying the flag in their year’s Champions League campaign. The top-division Bundesliga side made it to the finals of the competition but lost to French champions Lyon in the summit clash.

(The above story first appeared on LatestLY on Sep 10, 2020 07:18 PM IST. For more news and updates on politics, world, sports, entertainment and lifestyle, log on to our website latestly.com).