Manchester United, who have been boosted by the return of Cristiano Ronaldo, would eye Champions League glory and hence, Ole Gunnar Solskjaer and his side would seek nothing less a winning start to the competition. Ronaldo would once again be in the spotlight and is expected to score after his brace for United in the Premier League last weekend. 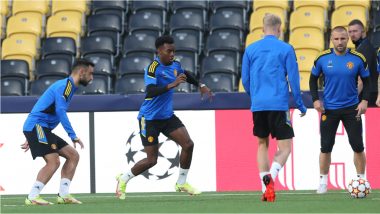 Manchester United begin their Champions League campaign against BSC Young Boys at the Wankdorf Stadium, looking to claim all three points. There has been a lot of positivity surrounding the Red Devils in the recent past with the sensational return of Cristiano Ronaldo grabbing a lot of headlines. Last season, Manchester United were easing into the second round with impressive wins in their opening three games but a disastrous end to their group stage campaign meant they made an early exit. The squad must have learnt a lot from it though and will be hoping for a better showing this year. BSC Young Boys, the Swiss champions, are not in the best of form domestically but playing in Europe is an added motivation. BSC Young Boys versus Manchester United will be telecasted on the Sony Ten Network and streamed on Sony Liv app from 10:15 PM IST. Cristiano Ronaldo Was Asked for His Shirt by Three Newcastle Players After Their EPL 2021-22 Match Against Manchester United (Watch Video)

Fabian Lustenberger, Cedric Zesiger, Esteban Petignat, Nico Maier, Joel Monteiro and Jean Pierre Nsame have been ruled out for Young Boys due to fitness issues. Mohamed Camara at the heart of the defence has his task cut out with him assigned the duty to mark Cristiano Ronaldo. Meschack Elia and Jordan Siebatcheu make up the forward line for the hosts with Christian Fassnacht providing the crosses from the flank. Scott McTominay is not part of the travelling squad for Manchester United as he continues to recover from a groin problem. Cristiano Ronaldo, the most successful striker in the history of the Champions League will start as the lone striker with Anthony Martial set for a start on the bench again. Donny Van de Beek has been promised the first-team action by Ole Gunnar Solskjaer but the Dutchman is not likely to make the cut once again with Fred preferred in the starting eleven.

No game is easy in the Champions League and Manchester United will be well aware of it. Expect the English side to secure a hard-fought 0-2 win here.

BSC Young Boys vs Manchester United clash in UEFA Champions League 2021-22  will be played at the Wankdorf Stadium in Bern, on September 14, 2021 (Tuesday). The game has a scheduled time of 10:15 pm IST (Indian Standard Time).

Sony Pictures Network are the official broadcasters of UEFA Champions League 2021-22 in India and will telecast the games live on its channels. Fans can tune into Sony Ten 1 HD/SD channels to watch the live telecast of BSC Young Boys vs Manchester United on TV.

Sony Pictures Network’s official OTT platform Sony Liv will be streaming the game live for its fans in India. You can tune into the Sony Liv app or website to watch BSC Young Boys vs Manchester United, UEFA Champions League 2021-22 live streaming online. JioTV would also provide live streaming for this match.

(The above story first appeared on LatestLY on Sep 14, 2021 09:35 PM IST. For more news and updates on politics, world, sports, entertainment and lifestyle, log on to our website latestly.com).