This match would be an exact repeat of last year's Champions League final and this time, Pep Guardiola would be keen on having a different outcome to the match. A blockbuster Premier League encounter awaits fan at the Stamford Bridge today as both Chelsea and Manchester City would be aiming to give it their best in order to secure full points. 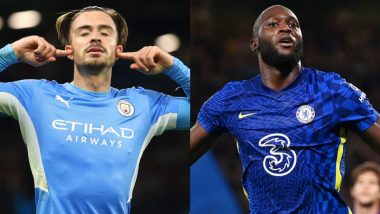 Chelsea would host Manchester City for a Premier League 2021-22 clash at the Stamford Bridge on Saturday, September 25. The match would begin at 5:00 PM IST (Indian Standard Time). Thomas Tuchel's side have maintained the momentum that they had gained last season by winning the Champions League against the same opponents they face on Saturday and Chelsea would be more than eager to prove a point or two as potential title-contenders this season with a win over the defending champions. Not that they have not, already. The London club has performed impressively in the Premier League this season and yet to lose a match. The only match where they have lost points is against Liverpool, that too they played with 10 men and managed to hold Jurgen Klopp's rampant side to a draw.  Cristiano Ronaldo Winds the Clock Back, Records an Impressive 32.51 km/h Sprint at 36 During Manchester United vs West Ham, EPL 2021-22

Placed right at the top of the table with 13 points from five games, the Blues would walk into this clash with momentum and confidence, which has further been boosted by the return of top striker Romelu Lukaku, who has already scored thrice. He would be a key player for Chelsea if they hope to win all available points from this match. Manchester City too have been in fine form this season, barring that first match loss to Tottenham Hotspur and they too  would like to make a statement by handing Tuchel's side their first loss this season and also avenging last season's Champions League loss. Jack Grealish's performance would be important for the Mancunians in this fixture. Here are the live streaming details of this match.

Chelsea vs Manchester City  match in Premier League 2021-22 will be played at the Stamford Bridge in London. The game will be held on September 19, 2021 (Sunday) and the match is scheduled to begin at 05:00 pm IST (Indian ;Standard Time).

Where to Get Live Telecast of Chelsea vs Manchester City, Premier League 2021-22 Football Match?

Fans in India can watch the Chelsea vs Manchester City  match live on Star Sports channels since Star Network is the official broadcaster for the Premier League 2020-21 in India. Fans can tune into Star Sports Select SD/HD channels to live telecast the clash.

How to Get Free Live Streaming of Chelsea vs Manchester City, Premier League 2021-22 Football Match?

The game will also be available online for live streaming. As Star Network is the official broadcaster for Premier League in India, fans can watch the live streaming of the Chelsea vs Manchester City match on Disney+Hotstar.

The match is  a clash of equals and a 1-1 draw is expected.

(The above story first appeared on LatestLY on Sep 25, 2021 02:53 PM IST. For more news and updates on politics, world, sports, entertainment and lifestyle, log on to our website latestly.com).