Cristiano Ronaldo Winds the Clock Back, Records an Impressive 32.51 km/h Sprint at 36 During Manchester United vs West Ham, EPL 2021-22 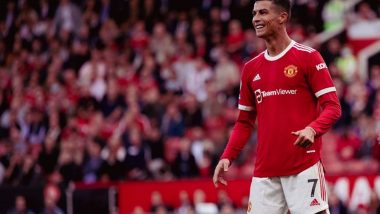 Cristiano Ronaldo is truly one of the fittest footballers of this generation. He has excelled in all aspects of the game. Whether it's scoring goals boring acing at the fitness tests, CR7 has surely aced all aspects of the game. Now, here's another observation that proves CR7 is one of the fittest footballers in the world. So recently during the match against West Ham, Cristiano Ronaldo recorded a speed of 32.51 kmph and once again proved that he still rules the field. Cristiano Ronaldo Scripts A Couple of Records in Premier League, Tops Shots Per Game & Shots on Target.

He finished the game by being the fastest player on the pitch and also went on to beat beating Aaron Wan-Bissaka and Jarrod Bowen. Ronaldo has already named a couple of records for himself as he aced a couple of stats. Not only did he top shots per game but also shots on target. Needless to say that Ole Gunnar Solskjaer is also going gaga over Ronaldo. “Ronaldo feels the big moments and he is ruthless,” the coach said. “He is lethal and has lifted everyone’s games. He smells out danger and has become a great team player and a great goalscorer," he further added.

Ronaldo has scored three goals so far in a couple of games and his fans are hoping that he keeps dazzling with his form. The Portugal star joined Manchester United after breaking his stint with Juventus. His homecoming was not only celebrated by the fans but also his teammates who posted tweets for the five-time Ballon d'Or winner on social media to welcome him to the Red Devils.

(The above story first appeared on LatestLY on Sep 22, 2021 10:52 PM IST. For more news and updates on politics, world, sports, entertainment and lifestyle, log on to our website latestly.com).