Messi has had a dream run in the tournament so far and has been one of the reasons for his side's dominating show in this edition of the Copa America. Leading both the goal and assists charts, Messi has broken quite a few records this time. 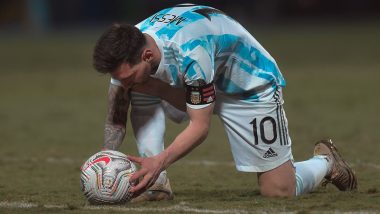 Four goals. Five assists. Dramatic celebrations. Jaw-dropping free-kicks. Lionel Messi is having a wonderful time for Argentina in Copa America 2021. He has been the driving force behind the team's success and journey to the final where they would now battle it out against Brazil in a bid to gain South American supremacy, on Sunday. June 11. The Barcelona star has had many painful memories of missing out on Copa America titles in the past but this time, he seems to have put all of that behind and is looking really confident to finally win an international title with Argentina. Lionel Messi Gives Colombian Defenders a Run for Their Money During Copa America 2021 Semi-Final, Argentina Captain’s Video Goes Viral

Of the 11 goals Argentina has scored in this year's Copa America, Messi has had a  direct involvement in nine of them. The highlight of those goals were his scintillating free-kicks, out of which he scored two goals. He is currently heading the goalscoring charts with four goals. Here are some records which he has already created in this edition of the competition:

1) Most Argentina appearances: When Messi took the field against Bolivia in his side's last group stage match, he overtook Javier Mascherano to become the most-capped player for Argentina. Messi now has 150 international caps for Argentina, three more than what Mascherano had.

2) Most assists: Other than scoring world-class goals, Lionel Messi has also been creating opportunities and assisting teammates to net some goals. He now has five assists in six matches, the most by a player in one edition of the South American championships.

3) Most Copa America appearances for Argentina: Messi, while playing for his side in this Copa America, became the first Argentina player to feature in six editions of the tournament, again going past Javier Mascherano, who had played five Copa America tournaments.

(The above story first appeared on LatestLY on Jul 08, 2021 08:45 PM IST. For more news and updates on politics, world, sports, entertainment and lifestyle, log on to our website latestly.com).