Czech Republic vs England, UEFA Euro 2020 Live Streaming Online & Match Time in IST: How to Get Live Telecast of CZR vs ENG on TV & Free Football Score Updates in India

Czech Republic vs England Euro 2020 match will be played on June 23, 2021 (Tuesday mid-night) at the Wembley Stadium in London. The match is scheduled to start at 12:30 am IST (Indian Standard Time). 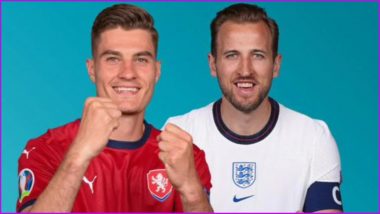 England face Czech Republic in a crunch game in Group D which will have a huge bearing on their round of 16 prospects. After a decent 1-0 win over Croatia, the Three Lions could not find a way past Scotland in their second game. Old problems related to big match nervousness seems to have creeped in the squad and that is certainly not good signs for Gareth Southgate. The English team is full of superstars who feature in some of the top European clubs but have just managed a solitary goal so far which is disappointing. Opponents Czech Republic are top of the group currently and they certainly will be a tough nut to crack. The last time the two teams met, it was Czech Republic who managed a 2-1 comeback win. Euro 2020 Day 12 Schedule: Today's Matches With Kick-Off Time in IST, Upcoming Fixtures and Updated Points Table.

Patrik Schik has been one of the standout players of the tournament so far and the Czech Republic fans will look forward to him scoring against England. Vladimir Darida is the chief playmaker in the side and acts as a glue between midfield and attack. Tomas Soucek will be tasked to protect the back four but the West Ham United player is a threat in the opposition box as well.

Ben Chilwell and Mason Mount will not feature for England as they are currently self-isolating after coming in contact with Billy Gilmour who is COVID positive. Jack Grealish could get a game in as the no 10 while Manchester United target Jadon Sancho is hoping for a start too. Harry Kane has endured a torrid Euro campaign so far but he is virtually un-droppable under Gareth Southagte.

Czech Republic vs England Euro 2020 match will be played on June 23, 2021 (Tuesday mid-night) at the Wembley Stadium in London. The match is scheduled to start at 12:30 am IST (Indian Standard Time).

Sony Pictures Networks India is the official broadcaster of UEFA EURO 2020 in India. It will broadcast Czech Republic vs England, live match on Sony Ten 2 in English, Sony Ten 3 in Hindi, Sony Ten 4 in Tamil and Telugu, Sony Six in Bengali and Malayalam.

(The above story first appeared on LatestLY on Jun 22, 2021 09:45 PM IST. For more news and updates on politics, world, sports, entertainment and lifestyle, log on to our website latestly.com).