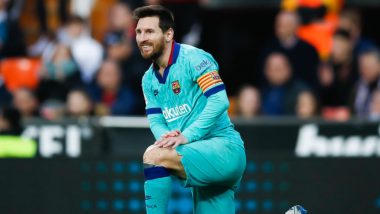 Lionel Messi, one of the greatest footballers in the world, turned 33 today. Messi was born on June 24, 1987, in Rosario, Argentina and he went on to become a record-breaking footballer. Messi has won Ballon D'Or six times. The Argentina footballer made his Barcelona debut in 2003 and was just 17 at that time. Messi has won ten La Liga, four Champions League, six Copa del Ray, three Club World Cup and as many European Super Cup titles with Barcelona. Lionel Messi Birthday Special: Times When FC Barcelona Star Won Our Hearts With His Acts of Kindness.

As Messi turned 33 today, #HappyBirthdayMessi was one of the trending topics on Twitter. Wishes pour in for the FC Barcelona star as fans from all parts of the world tweeted on the special day of their favourite footballer. Here are some of the posts: Lionel Messi Birthday Special: 10 Pictures of Argentine Star Which Will Give You Family Goals!.

Happy birthday to the greatest ever♥️👑

It is a privilege to watch you decorate the field. 33 years old and still playing the game like no one else.

Messi has inspired an entire generation of young and upcoming footballers. he was an inspiration for footballers all over the world. Several stars of the present including the likes of Paulo Dybala, Thiago, Paul Pogba, and Neymar Jr have spoken about messi #HappyBirthdayMessi pic.twitter.com/7JhL3wbV4P

Happy birthday to "The Greatest" ever to step onto the field. 😎Lionel Messi😎#HappyBirthdayMessi pic.twitter.com/jJgwqp4z0Q

Meanwhile, following the coronavirus pandemic break, Messi is back in action and is currently plying his trade in the La Liga 2019-20. The star footballer was recently in action against Athletic Bilbao at the Camp Nou. Barcelona won the game after Ivan Rakitic's winner in the 71st minute. Barcelona are now on top of the La Liga 2019-20 points table.

(The above story first appeared on LatestLY on Jun 24, 2020 12:27 PM IST. For more news and updates on politics, world, sports, entertainment and lifestyle, log on to our website latestly.com).