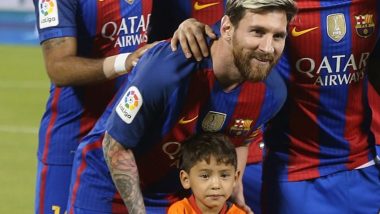 Lionel Messi is one of the greatest footballers to have graced the game. Messi was born on June 24, 1987, in Rosario, Argentina. The six-time Ballon d'Or winner has established himself in the football world like no other. Apart from his on-field skills, Messi is known for his off-field charity work as well. The Argentine has many times helped those in need and continues to do so. As the footballer turns 33, we take a look at times when Messi won our hearts with his acts of kindness. Lionel Messi Birthday Special: 10 Pictures of Argentine Star Which Will Give You Family Goals!.

Messi's Donation in Fight Against COVID-19: As the world is fighting coronavirus pandemic, the footballer donated one million euros to a hospital in Barcelona. The hospital apart from treating COVID-19 patients, is doing research as well.

Donation to a Hospital: The footballer through his foundation donated 30 million pounds to Hospital Sant Joan de Deu to build an oncology centre for children. The paediatric oncology centre is estimated to be the largest in Europe.

Meeting Young Afghan Fan: In 2016, then six-year-old Afghan boy Murtaza Ahmadi's photos of him wearing a blue-and-white striped plastic bag with Messi's name and number on the back went viral. Messi then made sure he met the young fan and also gifted him a shirt. Later, the young boy, walked out on to the pitch with Messi before Barcelona's friendly in Qatar.

No Wedding Gifts: When Messi married his childhood friend Antonella Rocuzzo in 2017, the footballer requested guest not to bring gifts but instead donate to his foundation.

Apart from his charity, Messi has been UNICEF Goodwill Ambassador as well. And during such period, the footballer travelled to Haiti in 2010 after an earthquake had hit the Central American country. Messi highlighted the plight of the people who had suffered badly due to the natural calamity. These are just some instances when Messi did the charity work, the football has been involved in numerous such acts. And, this for sure makes him great!

(The above story first appeared on LatestLY on Jun 24, 2020 11:00 AM IST. For more news and updates on politics, world, sports, entertainment and lifestyle, log on to our website latestly.com).