Eight groups consisting of four teams each based on FIFA rankings and their respective confederations, will play in the league phase in a round robin format. Lionel Messi led Argentina alongwith Saudi Arabia, Mexico and Poland are in group C of the first round. 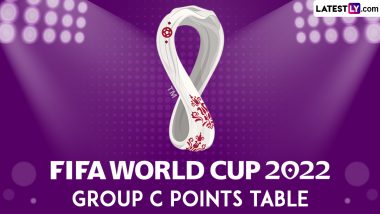 Argentina qualified for the round of 16 as Group C toppers, courtesy of an emphatic 2-0 win over Poland in FIFA World Cup 2022 on Thursday, December 1. Poland joined the two-time champions into the last 16 owing to a superior goal difference than Mexico, who finished third in the group with a 2-1 win over Saudi Arabia. The 2022 FIFA World Cup Qatar is underway and the championship will feature 32 countries competing for the sole aim to clinch the glorious sporting trophy on 18 December. The 2022 FIFA World Cup in Qatar will be the 22nd edition of the showpiece event which will run through 29 days. 64 matches will be played in two rounds; Group stage and Knockouts across eight venues in Qatar. FIFA World Cup 2022 Schedule for Free PDF Download Online: Get Football Fixtures, Time Table With Match Timings in IST and Venue Details.

The group stage will commence from 20 November till 2 December. Eight groups consisting of four teams each based on FIFA rankings and their respective confederations will play in the league phase in a round-robin format. Lionel Messi led Argentina along with Saudi Arabia, Mexico and Poland are in Group C of the first round. The top two teams from the group with the maximum points will advance to play in the first phase of the knockouts, the round of 16.

Fans fancy first world cup glory for the Argentina captain in Qatar as anticipated this might be Lionel Messi's last FIFA World Cup. Argentina had a woeful start in the last edition in 2018 before making it to the Knockout stage. Saudi Arabia and Poland  were terminated from the previous edition of the world cup early in group stage whereas Mexico were eliminated from the competition after losing to Brazil in round of 16 by 2-0.

(The above story first appeared on LatestLY on Nov 22, 2022 05:26 PM IST. For more news and updates on politics, world, sports, entertainment and lifestyle, log on to our website latestly.com).