Germany vs Portugal, UEFA Euro 2020 Live Streaming Online & Match Time in IST: How to Get Live Telecast of GER vs POR on TV & Free Football Score Updates in India

Germany vs Portugal Euro 2020 match will be played on June 19, 2021 (Saturday) at the Allianz Arena in Munich, Bavaria, Germany. The match is scheduled to start at 09:30 pm IST (Indian Standard Time). 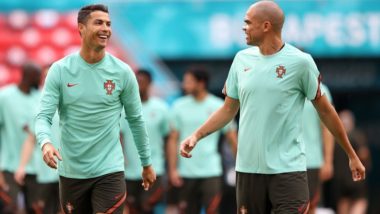 Germany are left with a mountain to climb in their efforts to stay alive in the Euro 2020 as defending champions Portugal lay in wait to send them crashing out. The Die Mannschaft created a few chances against France in their opener but looked far from convincing as they crashed to a 1-0 defeat. The result continued a series of poor performances in major tournament under Joachim Low for the Germans who will have to come out all guns blazing tonight. Opponents Portugal needed a late Cristiano Ronaldo show to help beat Hungary but their overall pattern of play was good. Euro 2020 Day 9 Schedule: Today's Match With Kick-Off Time in IST, Upcoming Fixtures and Updated Points Table

Germany will look to make a few changes in the forward line with Leroy Sane likely coming into the playing eleven in place of Kai Havertz. Serge Gnabry had a game to forget against the French and Chelsea forward Timo Werner is a candidate to play as the lone man up top. Toni Kroos and Ilkay Gundogan had a pedestrian approach in the previous match and Germany could do with an enforcer in midfield like Leon Goretzka.

Portugal manager Fernando Santos could be tempted to field an unchanged line up against Germany but winger Rafa Silva may alter these plans. The pacey winger stretched the Hungary defence when he came on late in the last match and Germany could struggle to keep a lid on him. Cristiano Ronaldo played well as a frontman despite starting most games out wide for Juventus last season. Joao Felix and Renato Sanches are good options from the bench and Portugal may need them in such a crunch tie.

When is Germany vs Portugal, UEFA EURO 2020 Match? Date, Time and Venue Details

Germany vs Portugal Euro 2020 match will be played on June 19, 2021 (Saturday) at the Allianz Arena in Munich, Bavaria, Germany. The match is scheduled to start at 09:30 pm IST (Indian Standard Time).

Sony Pictures Networks India is the official broadcaster of UEFA EURO 2020 in India. It will broadcast Germany vs Portugal, live match on Sony Ten 2 in English, Sony Ten 3 in Hindi, Sony Ten 4 in Tamil and Telugu, Sony Six in Bengali and Malayalam.

The live online streaming of Germany vs Portugal, UEFA EURO 2020 football match will be available on the SONY LIV app and website. JIO will also provide the online streaming of the game for its users on the JIO TV app. Germany have a brilliant record against Portugal with 10 wins in 18 matches. Their latest battle should feature goals and could likely end in a draw.

(The above story first appeared on LatestLY on Jun 19, 2021 04:46 PM IST. For more news and updates on politics, world, sports, entertainment and lifestyle, log on to our website latestly.com).