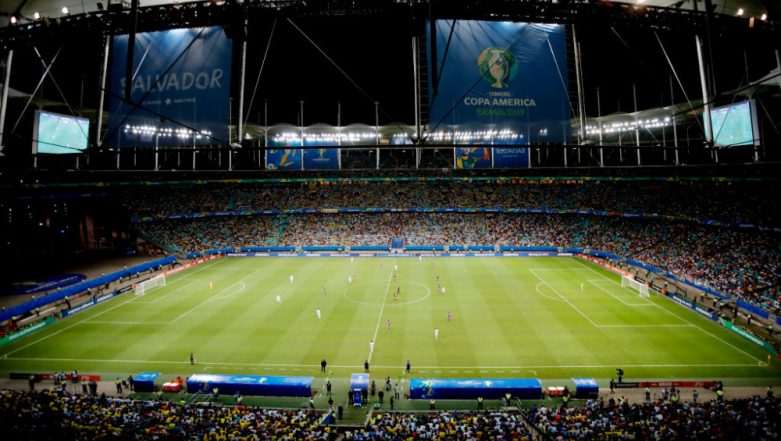 Defending champions Chile begin their Copa America 2019 campaign against Asian Cup finalist Japan in what promises to be a fascinating encounter. Chile won the top prize of American football twice in 2015 and 2016 but failed to qualify for the 2018 World Cup which was a real shocker. They have been fairly inconsistent off late which will give Japan hope. The Samurai Blue lost to Qatar in the summit clash of the Asian Cup but they still remain a quality team featuring world-class talent. With both sides still face Uruguay, they need points from this one. For Japan vs Chile Copa America 2019 live streaming Copa America 2019 Schedule in IST, Free PDF Download: Get Fixtures, Groups and Time Table With Match Timings and Venue Details of Football Tournament in Brazil.

Chile will deploy a string team for the opener with Manchester United flop Alexis Sanchez and Barcelona midfielder Arturo Vidal key names set to feature. Alexis Sanchez is Chile’s record goalscorer with 41 goals and he will be hoping for some good time on the pitch after a horrible season in England. Gabriel Arias will be in the goal for the defending champions as Claudio Bravo is not in the squad owing to a long term injury. Eduardo Vargas is also a potent force in front of goal and Japan will have to be wary of the threat he possess.

The second match of Group C in Copa America 2019 will take place between Japan and Chile. Japan vs Chile will be held on June 18, 2019, as per India time at 4:30am IST (Indian Standard Time) 8 pm BRT, 7 pm ET at Cícero Pompeu de Toledo Stadium.

There were talks of Copa America 2019 matches to be telecast live by Sony Network, however, no such thing materialised. Sadly, fans in India will not be able to watch the live telecast of Japan vs Chile football match on TV.

If you’re JIO user, you can watch Japan vs Chile via live streaming online on Jio TV app. There were also reports of Copa America matches being available on Sony LIV app, but there is nothing for the Copa America fans!

The last time Japan were part of the Copa America was back in 1999 where they were eliminated in the group stage. They will love to make it to the knock out stage this time around but have a mountain to climb to achieve it. Takefusa Kobo, who is now a Real Madrid player has a lot of potential and is one to look out for.

Defence is a weak area for Japan with six out of the eight defenders in current squad yet to make their debut. Shinji Okazaki has over a century caps to his name and will be eager to add to his 50 goals tally. Chile will not find it hard to beat a relatively inexperienced Japan side who are currently in a rebuilding phase.