Henderson became the third Liverpool player to win the FWA award in the last seven years after Luis Suarez in 2014 and Mohamed Salah in 2018. He was first Liverpool captain to lift the Premier League trophy for the first time in three decades. Liverpool were coronated as champions after their final home game against Chelsea, which they won 5-3. 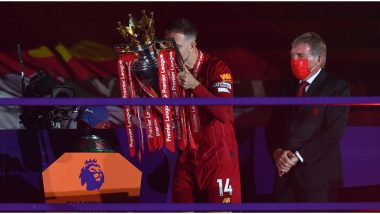 Liverpool captain and midfielder Jordan Henderson has been named England's Player of the Year by the Football Writers’ Association for his outstanding performance and for leading Liverpool to their first Premier League title in 30 years. Henderson, who is currently out with a knee injury, played 30 Premier League matches before the injury ruled him out of the final four matches. Henderson scored four times and assisted five goals. Manchester City’s Kevin de Bruyne came second in the voting while Marcus Rashford and Liverpool duo Virgil van Dijk and Sadio Mane completed the top five. Liverpool Midfielder Fabinho's House Burgled During Premier League Title Celebrations.

“As grateful as I am I don’t feel like I can accept this on my own,” Henderson was quoted as saying by The Guardian. “I don’t feel like anything I’ve achieved this season or in fact during my whole career has been done on my own. I owe a lot to so many different people – but none more so than my current teammates – who have just been incredible and deserve this every bit as much as I do,” he added. James Milner Aims Explicit Jibe at Manchester United During Liverpool Premier League 2019-20 Trophy Celebrations (Watch Video).

Henderson, on Friday, became the third Liverpool player to win the FWA award in the last seven years after Luis Suarez in 2014 and Mohamed Salah in 2018. He was first Liverpool captain to lift the Premier League trophy for the first time in over three decades. Liverpool were coronated as champions following their final home game against Chelsea, which they won 5-3.

“We’ve only achieved what we’ve achieved because every single member of our squad has been brilliant and not just in matches. Not just in producing the moments that make the headlines and the back pages but every day in training,” Henderson said after being named the winner.

He also said that he was accepting the award on behalf of the entire squad. “If anything I hope those who voted for me did so partly to recognise the entire team’s contribution. Individual awards are nice and they are special and I will cherish this one. But an individual award without the collective achievement wouldn’t mean anywhere as much to me – if anything at all.”

(The above story first appeared on LatestLY on Jul 24, 2020 03:49 PM IST. For more news and updates on politics, world, sports, entertainment and lifestyle, log on to our website latestly.com).