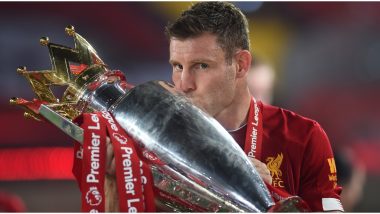 Liverpool midfielder James Milner was recorded taking a dig at Manchester United while celebrating Liverpool’s Premier League title victory. Liverpool were coronated as the English Premier League champions for season 2019-20 following their 5-3 win over Chelsea in their final home game for the season. And while celebrating the title win with his teammates, Milner could be heard calling United “f**king W*nkers.” The 34-year-old lifted his third Premier League trophy but first with Liverpool ending the club’s 30-year-old wait for a league title. Sadio Mane Hilariously Trolls Roberto Firmino For Being Bald After Liverpool Wins EPL 2019-20, Asks Mohamed Salah to Give Bobby a Few Hair Strands (Watch Video).

Milner, who joined Liverpool as a free agent in 2015, was ecstatic and celebrated with his teammates after ending Liverpool’s 30-year drought for a Premier League title. As the celebrations began, after Liverpool beat Chelsea 5-3 in their penultimate league game, with captain Jordan Henderson lifting the title, Milner could be heard revealing his hatred for red ribbons after seeing them draped on the Premier League trophy. Virgil van Dijk, Jordan Henderson, Andy Robertson & Other Members of Liverpool Post Tweets on Social Media After Winning EPL 2019-20.

Milner “First time I ever wanted a red ribbon. It’s always been United before. F*cking w*nkers” 😂

"It’s the first time I ever wanted a red ribbon,” Milner, who also played for United’s rivals Leeds and Man City, was heard saying. "It’s always been United before. F*cking w*nkers!" Milner was born in Yorkshire and supported one of United’s main rivals, Leeds, as a boy.

He even went on to play for Leeds and had spells at Aston Villa and Newcastle before joining City in 2010. Milner won the Premier League title with City in 2012 and 2014-15 before joining Liverpool. The versatile player has already made over 200 appearances for Liverpool and has also won the UEFA Champions League last year with Liverpool.

(The above story first appeared on LatestLY on Jul 23, 2020 07:00 PM IST. For more news and updates on politics, world, sports, entertainment and lifestyle, log on to our website latestly.com).