Juventus Declares 22-Member Squad for Serie A 2019-20 Match Against Atalanta, Paulo Dybala Back! 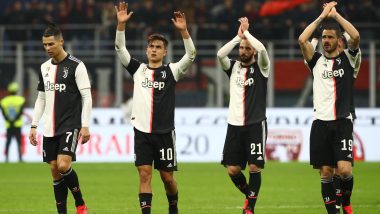 Juventus will be taking on Atalanta in the Serie A 2019-20 game against Atalanta at the Allianz Stadium. A few minutes ago, the Biaconeri released their 22- member squad on their social media account. The 22-member squad witnesses the return of Paulo Dybala who missed on the last fixture against AC Milan after a match long suspension. The two teams have had quite a contrasting fortune in the previous games. Juventus enters the game with an embarrassing  4-2 loss against Zlatan Ibrahimovic's AC Milan at the San Siro. Adrien Rabiot and Cristiano Ronaldo were the ones who scored for the team but in the second half of the game, AC Milan tore into Juventus to win the game. Juventus vs Atalanta, Serie A 2019–20 Free Live Streaming Online & Match in Indian Time: How to Get Live Telecast of JUV vs ATN on TV & Football Score Updates in IST.

Whereas, Atalanta enters the game with a 2-0 win against Sampdoria. Place on number three Atalanta has 66 points in its kitty. Whereas, despite the loss, Juventus still stands on number one of the Serie A 2019-20 points table with 75 points in his kitty. The Old Lady would look to extend their lead at the points table with a win here. Now, let's have a look at the squad declared by Juventus a while ago.

Talking about Atalanta, the team has remained unbeaten in last nine games and Juventus would looking to break their streak. The team has its eyes set on the number two slot and win here would bring them to number two position. The match will begin at 1.15 am IST.

(The above story first appeared on LatestLY on Jul 11, 2020 05:26 PM IST. For more news and updates on politics, world, sports, entertainment and lifestyle, log on to our website latestly.com).