Juventus vs Verona Live Streaming Online & Match Time in IST: How to Get Free Live Telecast of Serie A 2020–21 on TV & Football Score Updates in India?

Juventus continue to be without their talismanic forward Cristiano Ronaldo who is quarantined after testing positive for COVID-19. Giorgio Chiellini picked up an injury in midweek and is certain to miss the game. Alvaro Morata and Paulo Dybala are expected to line up in a two-man forward line with Aaron Ramsey playing as the no 10 behind them. 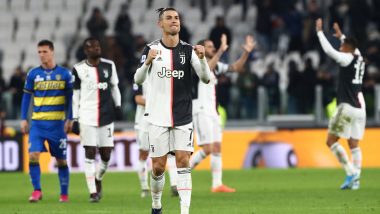 Juventus vs Verona, Serie A 2020-21 Live Telecast and Live Streaming Online in IST: Juventus are in a bit of stagnation in the Italian Serie A with two draws in their opening four games so far. Next up for them is Hellas Verona at home, a game they must win in order to avoid falling further behind in the title race. New manager Andrea Pirlo saw his side come up triumphs in the Champions League and will hope the game starts a momentum shift. Juventus have never really struggled to win the championship for many years now but this year does look like they will face the heat. Opposition Verona are 8th in the table and a win tonight could see them burst into the top four. JUV vs VER Dream11 Prediction in Serie A 2020–21: Tips to Pick Best Team for Juventus vs Verona Football Match.

Juventus continue to be without their talismanic striker Cristiano Ronaldo who is quarantined after testing positive for the Coronavirus. Giorgio Chiellini picked up an injury in midweek and is certain to miss the game. Alvaro Morata and Paulo Dybala are expected to line up in a two-man forward line with Aaron Ramsey playing as the no 10 behind them. New signing Arthur holds the key in midfield as he will be the one supplying the attackers. Matthijs de Light and Leonardo Bonnuci at the back should add calmness and stability in their defensive unit.

Marco Benassi, Andrea Danzi and Mert Cetin are out injured for Verona which is a blow for the visitors. To make matters worse, Koray Gunter and Antonin Barak are quarantined which gives manager Ivan Juric some selection headaches ahead of the big game. Nikola Kalinic is expected to start for Verona and his goal-scoring prowess could come in handy for the team.

When is Juventus vs Verona, Serie A 2020-21 Football Match? Know Date, Time and Venue

Juventus vs Verona match in Serie A 2020-21 will take place on October 26 (Sunday midnight). The match will be played at the Allianz Arena in Turin and is scheduled to start at 01:15 am IST (Indian Standard Time).

Where to Watch Live Telecast of Juventus vs Verona, Serie A 2020-21 Football Match?

Fans in India can live telecast the Juventus vs Verona match on Sony channels. Sony Sports Network are the official broadcasters of Serie A 2020-21 in India. So fans can tune into Sony Ten 2 and Sony Ten 2HD channels to catch the live-action of JUV vs VER clash.

How to Get Free Live Streaming Online of Juventus vs Verona, Serie A 2020-21 Football Match?

Live-action of the Juventus vs Verona match will also be available online. SonyLiv, the OTT of Sony Network, will be live streaming the Serie A 2020-21 match online for fans in India. Juventus have enough qualities about them to secure a crucial three points against Verona at home.

(The above story first appeared on LatestLY on Oct 25, 2020 03:38 PM IST. For more news and updates on politics, world, sports, entertainment and lifestyle, log on to our website latestly.com).