Barcelona clinched the Copa del Rey 2020-21 title with a magnificent 4-0 triumph over Athletic Bilbao in the final encounter. Lionel Messi was lethal in particular as he brought his A-game out and netted two spectacular goals to take the Catalan Giants over the line. The Argentina talisman was on cloud nine with his side's victory and he expressed his delight on Instagram. 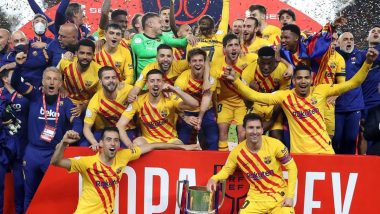 Barcelona clinched the Copa del Rey 2020-21 title with a magnificent 4-0 triumph over Athletic Bilbao in the final encounter. In what can be called a one-sided encounter at the Estadio de La Cartuja Stadium in Sevilla, the Catalan Giants looked in command right from the word go. Lionel Messi was lethal in particular as he brought his A-game out and netted two spectacular goals. While his efforts would have been enough to take the Blaugurna over the line, Frenkie de Jong and Antoine Griezmann also found the nets to enhance the margin of victory. Manager Ronald Koeman indeed looked a happy man, and this was Barcelona's first-ever title under his guidance. Notably, this is Barcelona's 31st Copa del Rey title, most for any side. Lionel Messi Scores Brace as Barcelona Thrash Athletic Bilbao 4–0 in Finals to Lift Copa Del Rey 2020–21 Title (Watch Goal Video Highlights).

Notably, the game wasn't that smooth for Barcelona like the scorecard suggests. Bilbao were good in defence throughout the first half, and no goals were scored in the first 45 minutes. However, tables turned around in the second half, and Barcelona did what they are known to do. Griezman opened the scoring in the 60th minute before De Jong doubled the lead with a strike three minutes later. Denting Bilbao further, the Argentina talisman found nets twice inside five minutes to make sure that Bilbao didn't make a dramatic comeback. Messi was indeed on cloud nine with his side's spectacular show through an Instagram post.

"It was a very tough Cup, and we deserved this joy! Champions !!!!!" he wrote while sharing some pictures of his side with the illustrious trophy.

Meanwhile, Barcelona's next goal will be to go atop La Liga 2020-21 standings. They currently hold third place with 65 points, one and two points behind Real Madrid and Athletico Madrid respectively. The Catalan Giants will next face Getafe on April 23, and a thumping victory might see them advancing at the pinnacle of the points table.

(The above story first appeared on LatestLY on Apr 18, 2021 09:36 AM IST. For more news and updates on politics, world, sports, entertainment and lifestyle, log on to our website latestly.com).