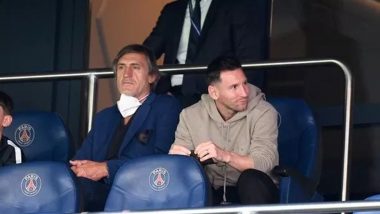 But now, Messi's father Jorge took to social media and posted the picture of his son holding the Ballon d'Or and put up an interesting caption to it. "Bla bla bla... carry on," read the caption of the snap. Even Cristiano Ronaldo publicly supported the claim that the Ballon d'Or was robbed from him and Robert Lewandowski. He responded to a comment on the fan page where the social media user had churned out a few stats that claimed that CR7 and Lewa were far more deserving than Messi for the Ballon d'Or 2021. He responded to the post by saying, "Facts."

Lionel Messi won the award after beating the likes of Robert Lewandowski, Karim Benzema, Cristiano Ronaldo, Mohamed Salah and others.

(The above story first appeared on LatestLY on Dec 02, 2021 01:39 PM IST. For more news and updates on politics, world, sports, entertainment and lifestyle, log on to our website latestly.com).