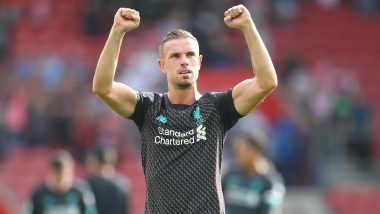 Liverpool, June 27: Barcelona striker Luis Suarez has labelled Jordan Henderson as 'one of the best captains in Liverpool's history while expressing his delight at seeing his former club win the Premier League. The Reds were crowned champions on Thursday night after Manchester City lost 1-2 to Chelsea, thus bringing an end to a 30-year wait for Liverpool. "It's a pleasure for me to speak with you and the Liverpool fans. I am so excited as well because I played for a few years there and I have so many friends there," Suarez told Liverpoolfc.com.

Henderson is the only player remaining at Anfield since Suarez's time on Merseyside - which concluded in the summer of 2014. "When I saw last year (him winning) the Champions League, I was so happy for him. Why? Because as some people know he had some problems with his dad and he had really good moments and some bad moments in Liverpool," the 33-year-old said. Steven Gerrard Pays Heart-Warming Tribute to Jordan Henderson After Liverpool Win Premier League 2019-20 Title.

"When he lifted the trophy, the dream is done but this season I (will be happy to) see him lifting the (Premier League) trophy because he is a really good person. I speak sometimes with him and I said to him, ‘You have a really good chance this season' and he is so excited.

"We watch some (Liverpool) games when we can and we see that Jordan, he is the captain from the midfield. He (Henderson) speaks a lot and for his teammates this is so important, when they have confidence with the captain. For me, Jordan is one of the best captains in Liverpool's history," Suarez added. Henderson and his teammates have now won the Champions League, UEFA Super Cup, FIFA Club World Cup and Premier League in a little over 12 months.

(The above story first appeared on LatestLY on Jun 27, 2020 08:04 PM IST. For more news and updates on politics, world, sports, entertainment and lifestyle, log on to our website latestly.com).