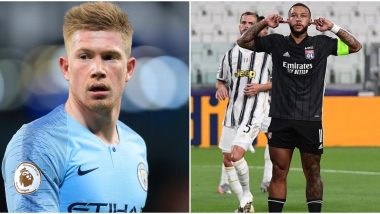 Manchester City will face Lyon in the final quarter-final match of UEFA Champions League 2019-20 for a place in the semi-finals. The winner between City and Lyon will take on Bayern Munich in the semis. City beat Real Madrid 4-2 on aggregate to progress into the last eight while Lyon overcame Cristiano Ronaldo and Juventus on away goals in the previous round. Both sides have met each other twice in the Champions League before with Lyon winning one and the drawing the other away from home. Pep Guardiola’s City are still winless against the French opponents. Meanwhile, take a look at some key players to watch out for Man City vs Lyon match. Manchester City vs Lyon, UEFA Champions League Live Streaming Online and Telecast Details.

Lyon lost to Juventus 2-1 in the second leg of their round of 16 UCL match but progressed ahead on away goals with Memphis Depay’s 12th-minute penalty proving crucial for Rudi Garcia’s side. They had beaten Juventus 1-0 in the first leg and advanced into the quarter-finals on away goals. Manchester City vs Lyon Dream11 Prediction in UEFA Champions League 2019–20 Quarter-Finals.

Manchester City, however, showed just why they were the favourites to win the UCL title this season with a dominant display against Real Madrid in the round of 16. Guardiola's side beat Real 2-1 in both the legs to knock out the record-time champions.

The young Brazilian striker has scored in three successive Champions League matches, which includes a goal each in both leg-wins over Real Madrid. He also assisted Raheem Sterling for the opening goal at the Etihad taking his assists tally to three in the UCL this season. With six goals and three assists in UCL 2019-20, Jesus is City’s most productive player in Europe this season.

He is also second in both the goalscoring and assists making charts for City in the Champions League. If he manages to continue his goalscoring streak, Jesus will join Raheem Sterling and Sergio Aguero as the City players to have scored in three different Champions League knockout matches in a single season.

The Belgian may not have been as effective in Europe as he has been in the Premier League where he equalled Thierry Henry’s long-standing record for most assists in a single Premier League campaign. Henry had assisted 20 goals for Arsenal in 2003-04 and De Bruyne equalled that record this season while also firing 14 goals in the league. But despite not finding the target or making assists in the Champions League with same precision, his path-breaking passes and through balls have been key to City and will once again be when they face Lyon.

He was out injured in December and would have missed the remainder of this season but for the coronavirus pandemic. Depay returned to action after full recovery and started the Coupe de la Ligue final against PSG, which Lyon lost on penalties after the match ended goalless in regulation time. He scored the decisive penalty which sealed Lyon’s progress into the semis. Depay, 26, has scored six goals from as many games in the Champions League this season and is Lyon’s highest goalscorer.

He started on the bench in the second leg against Juventus. But Dembele is sure to start against Man City. He had been in good nick in the cancelled Ligue 1 season and scored 16 goals. Dembele's understanding with Depay is key to Lyon’s functioning upfront. Both the forwards will have to be in good touch if Lyon are to pull a result in their favour.

Sterling has scored 11 goals in 13 games across all competitions since returning to action in June. He recorded a hat-trick against Brighton and has been firing on all cylinders since the restart. Sterling also opened the scoring against Real Madrid and could have scored a couple more against the former European champions. Sterling leads the goalscoring chart for City with seven strikes in the UCL this season and will certainly be the key for Guardiola and City on the wings against Lyon.

(The above story first appeared on LatestLY on Aug 15, 2020 07:05 PM IST. For more news and updates on politics, world, sports, entertainment and lifestyle, log on to our website latestly.com).