Neymar Injury Latest Update: PSG Star to Miss the Game Against Barcelona on February 17 Due to Adductor Muscle Injury

Paris Saint-Germain (PSG) attacking ace Neymar will be sidelined for up to four weeks with an adductor muscle injury, which means that the Brazilian star will not play the Champions League round of 16 first-leg clash against his former club Barcelona. 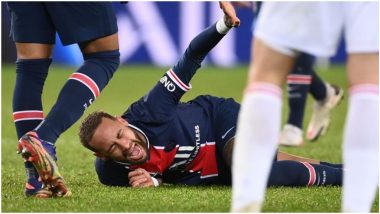 Paris, Feb 12: Paris Saint-Germain (PSG) attacking ace Neymar will be sidelined for up to four weeks with an adductor muscle injury, which means that the Brazilian star will not play the Champions League round of 16 first-leg clash against his former club Barcelona.

It was the second blow for PSG as Argentine winger Angel Di Maria was also ruled out of the match with a thigh injury, reports Xinhua news agency.

"After analysis of clinical exams and scans, it is expected that he'll be out for around four weeks depending on the evolution of the injury," the capital club said in a statement on Thursday. Cristiano Ronaldo Shares an Adorable Snap With Girlfriend Georgina Rodriguez on Social Media (See Pic).

PSG travel to Barcelona for the first leg on Tuesday, while the return leg is scheduled at the Parc des Princes on March 10.

Neymar picked the injury in PSG's French Cup match against Caen on Wednesday, as he limped off the pitch after being fouled by Alexis Beka Beka in the 54th minute.

"The sadness is great, the pain is immense and the crying is constant. Once again I will stop for a while to do what I love most in life, which is playing football," the 29-year-old wrote on Instagram.

"I don't know if the problem is me or what I do on the pitch," he added.

Neymar has been held back by injuries for a long time since arriving at Ligue 1 in 2017 for a world record 222 million euro fee, especially his bad luck before key Champions League knockout matches.

He missed the round of 16 clash against Real Madrid the first season with PSG, and Manchester United a year later at the same stage, with the French club being knocked out on both occasions.

(The above story first appeared on LatestLY on Feb 12, 2021 10:12 AM IST. For more news and updates on politics, world, sports, entertainment and lifestyle, log on to our website latestly.com).