Spain vs Poland, UEFA Euro 2020 Live Streaming Online & Match Time in IST: How to Get Live Telecast of ESP vs POL on TV & Free Football Score Updates in India

Spain, one of the favourites to enter the tournament, could settle for just one point after they played out a frustrating goalless draw against Sweden, despite dominating the match. Poland on the other hand, had succumbed to 1-2 loss at the hands of Slovakia in their Euro 2020 opening match. 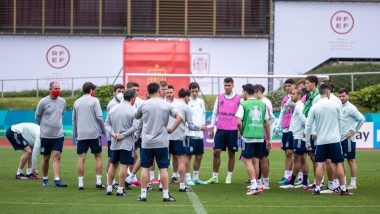 After having failed to secure victories in their opening matches, Spain and Poland would be aiming to win all three points available when they take on each other in a Group E encounter at the Estadio de La Cartuja, in Seville. The match is scheduled to take place at 12:30 AM IST (Indian Standard Time) on Sunday, June 20. Spain played out a frustrating goalless draw against Sweden in their last match. Luis Enrique's men dominated most of the match and even with more than 80% possession, they failed to break through the Swedish defense and win the match. Poland, on the other hand, were handed a 1-2 defeat by Slovakia. Placed fourth in Group E, Poland would look to star striker Robert Lewandowski to inspire them to a victory when they face the 2012 European champions. Cristiano Ronaldo Goal Video: Portugal Star Scores Spectacular Opener vs Germany in Euro 2020

Spain rather would want to create their opportunities into goals and would expect a better showing from their forwards on Sunday. Spain is currently placed third in Group E.

When is Spain vs Poland, UEFA EURO 2020 Match? Date, Time and Venue Details

Sony Pictures Networks India is the official broadcaster of UEFA EURO 2020 in India. It will broadcast Spain vs Poland, live match on Sony Ten 2 in English, Sony Ten 3 in Hindi, Sony Ten 4 in Tamil and Telugu, Sony Six in Bengali and Malayalam.

Head-to-head wise, Spain have won eight out of their 10 last matches. Poland have just one match with the other game ending in a draw. Spain had drubbed Poland 6-0 the last time these two sides squared off against each other in 2010.

(The above story first appeared on LatestLY on Jun 19, 2021 11:04 PM IST. For more news and updates on politics, world, sports, entertainment and lifestyle, log on to our website latestly.com).