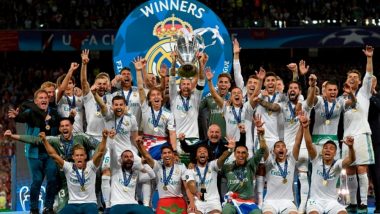 The match was in the news for the controversial tackle between Sergio Ramos and Mohamed Salah where the Liverpool striker had to leave the pitch in the middle of the game. Cristiano Ronaldo was seen consoling Momaed Salah as he was left injured on the pitch. Kaim Benzema was the first one who scored the goal at the 51st minute of the match. At the 55th minute of the match, Sadio Mane produced an equaliser and put the score on 1-1. Now, Gareth Bale at the 64th and 85th minute chipped in with a couple of goals and walked away with the title. You can check the winning moments shared by Los Blancos below:

After the match, Ronaldo had made his intentions clear about not staying at Real Madrid. Post this, Ronaldo went onto join Juventus, thus breaking his nine-year-long stint with the Los Blancos.

(The above story first appeared on LatestLY on May 27, 2020 01:54 PM IST. For more news and updates on politics, world, sports, entertainment and lifestyle, log on to our website latestly.com).