Arsenal's shambolic performance has raised fears of another season of underachievement. A good result in the cup competition could lift the mood of the whole squad. West Bromwich Albion versus Arsenal will start at 12:30 AM IST. 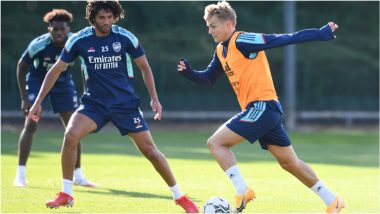 Arsenal will be looking to claim their first win of the season when they take on West Bromwich Albion in the Carabao Cup. The Gunners have lost to newly-promoted Brentford and European champions Chelsea in their opening two games of the campaign which has increased the pressure on manager Mikel Arteta. The Spaniard was booed along with his team at the final whistle of their London derby against the Blues by the Emirates faithful. The shambolic performance of the team have raised fear of another season of underachievement. A good result in the cup competition could lift the mood of the whole squad. West Bromwich Albion versus Arsenal will start at 12:30 AM IST. Romelu Lukaku Reacts After Scoring on Second Debut for Chelsea Against Arsenal in Premier League 2021–22 Clash, Says, ‘This One Is the Best of the Lot’

Alexander Lacazette has returned to training after making his recovery from the coronavirus. Pierre Emerick-Aubameyang played a few minutes against Chelsea and is expected to start on the bench again tonight as he builds his fitness post a covid induced quarantine. Willian and Ben White are still affected by the virus and that has impacted Arsenal’s performances. Martin Odegaard managed to sort out his visa issue in time following his move from Real Madrid but lack of training means he might miss this match. Manchester City to Unveil Vincent Kompany and David Silva Statues Outside Etihad Stadium Ahead of Arsenal Clash

Matt Clarke is out with a hamstring injury for West Brom and could be replaced by Semi Ajayi in the playing eleven. Grady Diangana should lead the attack for the hosts with Karlan Grant providing support in the attacking third. Cedric Kipre is an important player in defence for the Baggies as his raw pace and strength can keep Arsenal’s attackers at bay.

West Bromich Albion vs Arsenal second-round match in Carabao Cup 2021-22 will be played at The Hawthorns stadium. The EFL Cup match will take place on August 26, 2021 (Thursday mid-night) and is scheduled to start at 12:30 am IST (Indian Standard Time).

Where to Watch the Live Telecast of West Bromich Albion vs Arsenal, Carabao Cup 2021-22 Football Match in India?

The West Bromich Albion EFL Cup 2020-21 match will also be live on online platforms. Fans can log onto Voot Select to catch the live-action of the game either on the website or the app. Jio Users can also watch the game live on the Jio TV app.

West Bromwich Albion are in fine form under manager Valerien Ismael and they will test the Gunners’ resolve considering they are playing at home. Expect this match to be decided on penalties.

(The above story first appeared on LatestLY on Aug 25, 2021 05:49 PM IST. For more news and updates on politics, world, sports, entertainment and lifestyle, log on to our website latestly.com).