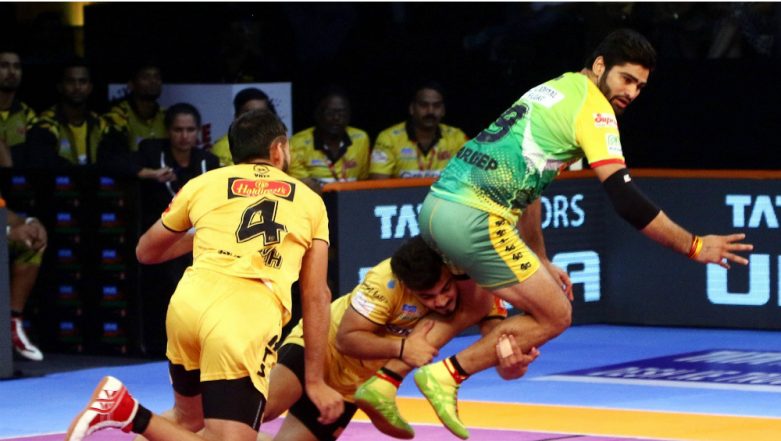 Pune, October 2018: Telugu Titans maintained their top spot in the Zone B points table of the Pro Kabaddi League (PKL) after a narrow 35-31 win over defending champions Patna Pirates on Friday. Despite a good start, the Titans faltered during the midway mark but came from behind to eventually edge out the Pradeep Narwal-led team.

The Titans took an early 4-0 lead in the initial minutes, however, some successful tackles and fine raids by Manjeet, who picked a total of eight points in the issue, helped Patna to make the score read 4-5. Skipper and star raider Pardeep then came with some excellent raids as Patna took a massive 12-6 lead. PKL Season 6 Points Table and Rankings: Puneri Paltan Climbs to Second Spot, Gujarat Fortunegiants Jumps to Fifth in Zone A Standings.

Titans's ace raider Rahul Chaudhary, who collected a total of seven points in the game, then showed some attack as his successful raids cut the deficit to four points with Patna still leading 13-9. The last few minutes of the first half saw Titans changing gears as some successful tackles and raids helped them reach 14 points, three points behind the defending champions.

The Titans continued their aggressive approach in the second half and inflicted an all out to lead the contest 22-21 at the 24th minute. They later picked a few more points through tackles to stretch the lead 25-21. Patna's raider Vijay Malik and Pradeep then finally reduced the deficit as scores were levelled at 27-27 at one stage and at 30-30 a few minutes later as the issue turned out to be a neck and neck fight.

However, Titans rode on their defence as they denied Patna raiders any further onslaught beside collecting crucial points through tackles and super tackles to extend their lead to 35-31 when the final whistles were blown. The Telugu Titans now have 16 points from four contests and are followed by Patna at the second place, which has 11 points from the same number of games.