According to Chauhan, India as the host country can field two teams and if the number of entries are in odd numbers, the host nation can field one more team. All the Indian teams -- Open, Women and additional team(s) -- will be selected based on ELO ratings, Chauhan added. 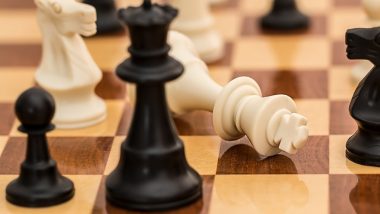 Chennai, March 16: Uncertainty shrouds the participation of the strong Russian chess team in the upcoming 44th Chess Olympiad to be held in Chennai in July-August 2022, officials said.

India as the host country can field two teams, and if the number of entries are in odd numbers, the host nation can field one more team. The suspense over Russia's participation is owing to the country's ongoing military operation against Ukraine and the West's economic sanctions and other actions against Russia.

A senior FIDE official told IANS preferring anonymity: "The Russian team probably may not come." Queried about the same, Bharat Singh Chauhan, the Tournament Director for the Olympiad who's also the Secretary of the All India Chess Federation (AICF), said everything depends on the International Chess Federation (FIDE).

He said the decision of FIDE will be followed and as of now no decision has been taken on the Russian team's participation. With the West against Russia and FIDE cancelling its sponsorship agreements with Russian and Belarusian companies, participation of the Russian team might result in several countries boycotting the event if the geopolitical situation does not improve by July. China Replaces North Korea in FIFA Women's U-17 World Cup in India.

The chess federation of Ukraine, as per reports, has called for a ban of all Russian players and Russians from the FIDE elections. In 1976, then Soviet Union and some other countries did not participate in the Olympiad due to political reasons.

The Russian team won the bronze in the last Chess Olympiad held at Batumi, Georgia. Russia has won the Olympiad gold eight times, besides winning the silver and bronze thrice each.

Meanwhile, Chauhan said around 3,000 hotel rooms have already been booked along the East Coast Road for the players and others coming for the mega chess event. The Olympiad venue will be the convention centre at the Four Points by Sheraton, located in the Mahabalipuram area, one of the main tourist destinations in southern India.

According to Chauhan, India as the host country can field two teams and if the number of entries are in odd numbers, the host nation can field one more team. All the Indian teams -- Open, Women and additional team(s) -- will be selected based on ELO ratings, Chauhan added.

Irai Anbu, the Chief Secretary of Tamil Nadu, the host state, said the government will render necessary assistance to AICF when queried about the state's financial involvement in the event.

According to AICF President Sanjay Kapoor, a Memorandum of Understanding (MoU) will be signed between the AICF and the Tamil Nadu government in connection with the Chess Olympiad.

The FIDE on Tuesday approved the bid offered by the AICF to host the mega biennial event that would see about 190 nations competing for top honours. The AICF had suggested Chennai as the venue.

"Around 2,500 persons -- chess players, coaches, team managers and chess officials from different countries, journalists and others -- will arrive in the city where the Chess Olympiad is held," British Grandmaster and FIDE Vice-President Nigel Short had said earlier.

(The above story first appeared on LatestLY on Mar 16, 2022 05:42 PM IST. For more news and updates on politics, world, sports, entertainment and lifestyle, log on to our website latestly.com).