The Wimbledon 2022 quarterfinalist Nick Kyrgios will appear in court in Australia next month in relation to an allegation of common assault, authorities said on Tuesday. 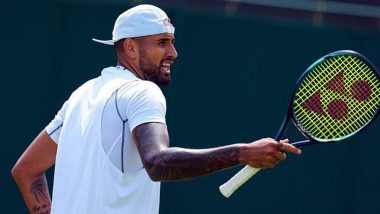 Canberra, July 5: The Wimbledon 2022 quarterfinalist Nick Kyrgios will appear in court in Australia next month in relation to an allegation of common assault, authorities said on Tuesday. According to the police, the matter follows an incident in December last year which Kyrgios' barrister says was "in the context of a domestic relationship". Kyrgios is now scheduled to appear at the Australia Capital Territory Magistrates' Court on August 2. "ACT Policing can confirm a 27-year-old Watson man is scheduled to face the ACT Magistrates' Court on 2 August in relation to one charge of common assault following an incident in December 2021," a police statement said. Wimbledon 2022: Nick Kyrgios Has a Message for Youngsters, Shares Heart-Warming IG Post (See Pic).

Jason Moffett, a lawyer representing Kyrgios, told Australia's Canberra Times that he has been briefed on the matter and that Kyrgios is aware of the charge. "The nature of the allegation is serious, and Mr. Kyrgios takes the allegation very seriously. Given the matter is before the court, he doesn't have a comment at this stage, but in the fullness of time we'll issue a media release," Moffett told the newspaper. The player's legal team said: "At present, the allegations are not considered as fact by the court, and Mr. Kyrgios is not considered charged with an offence until the first appearance." Wimbledon 2022 Day 9 Highlights: Top Results, Major Action From Tennis Tournament.

The 27-year-old Kyrgios, who will play Chile's Cristian Garin in the Wimbledon last eight on Wednesday, was on-site practising at SW19 on Tuesday but moved to a court out of the view of reporters and photographers and did not answer any questions. Meanwhile, the Association of Tennis Professionals (ATP) said that it is aware of the case involving Kyrgios. "The ATP is aware of the Australian case involving Nick Kyrgios but as legal proceedings are ongoing it would be inappropriate to comment further at this time," the ATP said in a statement.

(The above story first appeared on LatestLY on Jul 06, 2022 11:54 AM IST. For more news and updates on politics, world, sports, entertainment and lifestyle, log on to our website latestly.com).