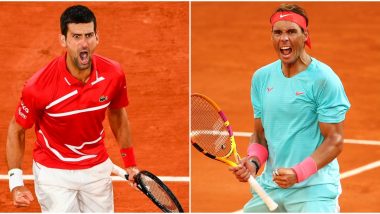 Rafael Nadal and Novak Djokovic will face-off in a historic final of the men’s singles of French Open 2020. Nadal is chasing a record-equalling 20th Grand Slam title and a 13th title win at Roland Garros while World No 1 and 17-time tennis major champion, Djokovic is looking to become the first man in the open era to win all four Grand Slam titles at least twice. This will the ninth meeting between Nadal and Djokovic in a Grand Slam final and both are level on 4-4. Meanwhile, fans searching for the live telecast, live streaming online, match timings in IST, venue details and all other information for the Novak Djokovic vs Rafael Nadal French Open final encounter please scroll down. Iga Swiatek Quick Facts: Here's All You Need to Know About the 19-Year-Old French Open 2020 Winner.

Djokovic fought back from two consecutive set defeats to beat Stefanos Tsitsipas 6/3, 6/2, 5/7, 4/6, 6/1 in the semi-final while Nadal brushed aside 12th seed Diego Schwartzman 6/3, 6/3, 7/6 (0-7) to advance to a 13th Grand Slam final at Roland Garros. He leads Djokovic 2-0 at the French Open and will hope to maintain the superiority. The Serbian has, however, lost only one match in this calendar year. Djokovic’s track record in 2020 reads 38-1 with the only loss coming at the US Open quarter-finals where he was disqualified for hitting a court judge.

What is the Date, Time, Schedule and Venue of French Open 2020 Novak Djokovic vs Rafael Nadal Men’s Singles Final Match?

Novak Djokovic vs Rafael Nadal French Open 2020 final match of men’s singles will take place on October 11 (Sunday). The final clash will be played at the Philippe-Chatrier Court in Roland Garros. The game has a tentative start time of 06:30 pm IST (Indian Standard Time).

Where to Watch the Live Telecast Novak Djokovic vs Rafael Nadal Men’s Singles Final Match of French Open 2020? Which TV Channels Will Broadcast it LIVE in India?

Those willing to catch live action of Novak Djokovic vs Rafael Nadal on other platforms can also follow live action online. Disney+ Hotstar, the OTT of Star Network, will be live streaming the French Open final online for its fans in India.

(The above story first appeared on LatestLY on Oct 11, 2020 12:56 PM IST. For more news and updates on politics, world, sports, entertainment and lifestyle, log on to our website latestly.com).