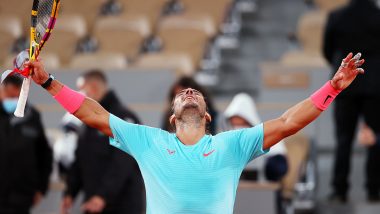 Rafael Nadal defeated Novak Djokovic in straight sets and lifted the French Open 2020 title. The Spanish legend was absolutely phenomenal in the finals as he never allowed the World No. 1 to put up a contest. This was Nadal’s 13th French Open title through which he equalled Roger Federer’s record of 20 Grand Slam titles on Sunday at the Phillipe Chattrier. Djokovic, who was in staggering form ahead of the final contest, looked utterly clueless as Nadal extended his dominance on clay-court. It was also his 100th win at Roland Garros and indeed one of the most memorable ones. Rafael Nadal vs Novak Djokovic VIDEO HIGHLIGHTS.

He needed just 2 hours and 43 minutes to knock out the Serbian talisman with the scoreline reading 6-0, 6-2, 7-5. Justifying his title ‘King of Clay,’ Nadal dominated the contest from the contest as the opening set lasted only 45 minutes where the Spaniard smashed ten winners. Djokovic couldn’t fight back in the second set as well, which lasted almost for an hour. Nadal took it 6-2, and it looked like the Spaniard was about to clinch his most dominant win at Roland Garros. Netizens were enthralled with Nadal’s stellar show as they hailed the French champions as GOAT. Iga Swiatek, Poland's 19-Year-Old Beats Sofia Kenin 6-4, 6-1 for French Open 2020 Title at Roland Garros.

The most normal thing to have happened in 2020: Nadal winning the French & making it 20 Grand Slams. No words. Virtual hugs to all Rafa bloods out there. #GOAT #Vamos pic.twitter.com/bSvZ9V7leP

Many say he is the #GOAT pic.twitter.com/TQLH7N2jgr

As Nadal has leveled Federer's incredible record of most Grand Slam titles, it will be interesting to see who'll come on top by the end of their career. With the Swiss being 39, he's definitely in the fag end of his career and it will be interesting to see  how he'll perform after coming back from injury. On the other hand, Nadal, 34, has a lot of Tennis left in him and he'll be raring to add many more feathers to his already illustrious crown. One shouldn't about Djokovic who has 17 titles in his kitty and the Serbian star will be raring to redeem himself.

(The above story first appeared on LatestLY on Oct 11, 2020 09:53 PM IST. For more news and updates on politics, world, sports, entertainment and lifestyle, log on to our website latestly.com).