The ‘King of Clay’ produced arguably one of the best performances ever in Paris as he won his record 13th Roland Garros title. The Spaniard matched Roger Federer’s record of 20 Singles Grand Slam title wins (the most in history for a male player) 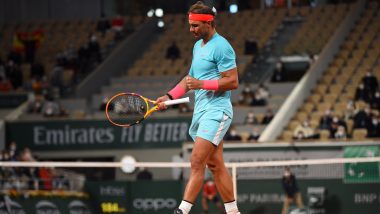 Rafael Nadal created history as he defeated Novak Djokovic in the finals of the French Open 2020 at the Philippe-Chatrier court in Roland Garros on October 11, 2020 (Sunday). The Spaniard matched Roger Federer’s record of 20 Singles Grand Slam title wins (the most in history for a male player) as he defeated his Serbian counterpart 6-0, 6-2, 7-5 in Paris. This was also Rafael Nadal’s 100th win at the Grand Slam in 102 matches. Rafael Nadal Thrashes Novak Djokovic to Win French Open 2020, Netizens Hail Spanish Tennis Star as GOAT.

The ‘King of Clay’ produced arguably one of the best performances ever in Paris as he won his record 13th Roland Garros title. The Spaniard booked his place in the summit clash after defeating Argentine Diego Schwartzman, who had defeated him earlier in the Italian Open 2020. Meanwhile, Novak Djokovic had got the better of Greek Stefanos Tsitsipas in the final four. Iga Swiatek, Poland's 19-Year-Old Beats Sofia Kenin 6-4, 6-1 for French Open 2020 Title at Roland Garros.

Rafael Nadal got off to a quick start in the final getting the better of Novak Djokovic 6-0 in game 1 while the second set wasn’t much different as the record champion took the game 6-2 with the Serbian offering very little resistance. However, Novak found his groove in the third set, taking his opponent to the limit, but Nadal was far too good in the end as he won the final set 7-5.

Rafael Nadal with this win matched Roger Federer’s record of 20 Grand Slam titles. Both of them are four majors behind the overall record holder, 24-time Grand Slam singles champion Margaret Court. Serena Williams is second in the list with 23 titles

The game lasted for a total of 2 hours and 41 minutes with Rafael Nadal bagging his 13th title in Paris in 15 years, with first coming in 2005. No singles player has won the Rayland Garros title more than the Spaniard. This was Novak Djokovic’s only second loss this year, first being the unfortunate disqualification in US Open 2020.

(The above story first appeared on LatestLY on Oct 11, 2020 09:56 PM IST. For more news and updates on politics, world, sports, entertainment and lifestyle, log on to our website latestly.com).