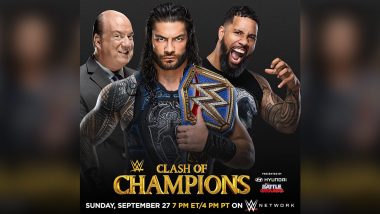 WWE Clash of Champions 2020 will take place at Amway Center in Orlando, Florida on September 27, 2020. The upcoming pay per view as the name suggests will have numerous title matches on the card. This year due to the coronavirus outbreak the event will take place without the crowd, however, through ThunderDome concept, the feel of the audience will be created. Interesting matches like Roman Reigns vs Jey Uso for Universal Championship and Drew McIntyre vs Randy Orton for WWE Championship are part of the event. Meanwhile, you have arrived at the right platform, if you are looking for WWE Clash of Champions 2020 live streaming, preview and match card. WWE Raw Sept 21, 2020 Results and Highlights: Randy Orton Assaults Drew McIntyre & Hits Keith Lee With Punt Kick; Retribution Reveals Themselves.

Drew McIntyre after successfully defending his WWE Championship at SummerSlam 2020 was brutally assaulted the very next day on Raw by The Viper where he was hit with three punt kick. Two weeks later, The Scottish Psychopath took perfect revenge by hitting three claymore kicks to Orton. The Viper earned the opportunity for WWE Championship match at Clash of Champions 2020 by defeating Seth Rollins and Keith Lee in the triple-threat number one contender match which took place the very next day after WWE Payback 2020. Roman Reigns sent out a strong message to Jey Uso this past week on SmackDown where he hit him with a superman punch. Speaking about women's division then Zelina Vega defeated Mickie James to earn Raw Women's Championship title opportunity against Asuka at Clash of Champions 2020. WWE SmackDown Sept 25, 2020 Results and Highlights: Roman Reigns Hits Jey Uso With Superman Punch Ahead of Universal Championship Match at Clash of Champions.

Apart from the Universal title match and WWE title match, it will be interesting to see high flying action between AJ Styles, Sami Zayn and Jeff Hardy for Intercontinental title, where they will put their body on the line through a ladder match. Stay tuned with LatestLY for more updates and news from WWE.

(The above story first appeared on LatestLY on Sep 27, 2020 09:45 PM IST. For more news and updates on politics, world, sports, entertainment and lifestyle, log on to our website latestly.com).