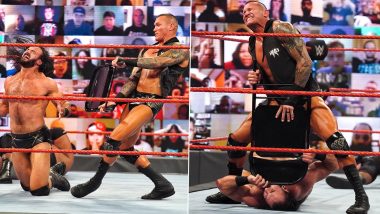 WWE Raw September 21, 2020 episode was the last one before Clash of Champions 2020. Many title matches got booked on this recently-concluded episode of Monday Night Raw. We saw Randy Orton take out Drew McIntyre ahead of the title match this Sunday. The Viper further went on to give punt kick to Keith Lee. Apart from this, we saw Retribution members revealed their identity as they now have the contract in WWE for themselves. Meanwhile, you have arrived at the right platform, if you are looking for WWE Raw September 21, 2020 results and highlights. WWE SmackDown Sept 18, 2020 Results and Highlights: Roman Reigns Teams Up With Jey Uso to Defeat Sheamus & King Corbin, Bayley Attacks Sasha Banks (View Pics)

Drew McIntyre was in a match against Keith Lee, however, we saw interruption by Randy Orton where he damaged the jaw of Scottish Psychopath by steel chair. The Viper then went to give punt kick to Keith Lee, post which he enjoyed the sight of destruction he has made. The Retribution confronted The Hurt Business, as their members - T-Bar, Mace, and Slapjac faced Bobby Lashley, MVP and Cedric Alexander in a six-man tag team match. The match ended in chaos as other members of Retribution came and attacked The Hurt Business. Brock Lesnar Contract Expires With WWE, Roman Reigns Chosen as Beast Incarnate's Replacement.

Now let's speak of women's division, Zelina Vega earned title opportunity against Asuka at upcoming Clash of Champions 2020 after defeating Mickie James in one on one match. We also saw Shayna Baszler and Nia Jax brutally defeat Lana and Natalya. Baszler and Jax will defend Women's Tag Team title against The Riot Squad on this Sunday at Clash of Champions, 2020.

#RETRIBUTION have finally revealed themselves!! #WWERaw

Is there anyone more deadly than The #Viper @randyorton in #WWE? #WWERaw

Tonight was pure CHAOS but @randyorton thrives on chaos... #RETRIBUTION

(The above story first appeared on LatestLY on Sep 22, 2020 09:47 AM IST. For more news and updates on politics, world, sports, entertainment and lifestyle, log on to our website latestly.com).