WWE NXT Super Tuesday II took place on September 8, 2020, where we saw Finn Balor defeats Adam Cole to become NXT Champion. The two best wrestlers from the black and gold brand of WWE fought their heart out to win the gold, however, The Prince emerges victorious in the end. 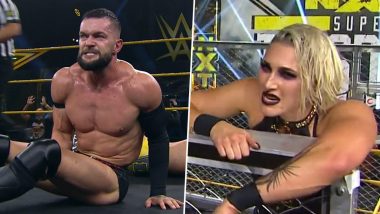 WWE NXT Super Tuesday II took place on September 8, 2020, where we saw Finn Balor defeats Adam Cole to become NXT Champion. The two best wrestlers from the black and gold brand of WWE fought their heart out to win the gold, however, The Prince emerges victorious in the end. We also witnessed a brutal steel cage match between Rhea Ripley and Mercedes Martinez on this recently concluded event of NXT. Rhea defeated Martinez in this match and proved that she is a pure badass. Meanwhile, you have arrived at the right platform, if you are looking for WWE NXT Super Tuesday II September 8, 2020 results and highlights. WWE Raw Results Sept 7, 2020 Results and Highlights: Drew McIntyre Takes Down Randy Orton With Claymore Kick, Dominik Mysterio Defeats Buddy Murphy to Register His First Singles Victory.

Last week on NXT Super Tuesday I, we saw first-ever fatal 4-way 60 mins iron man match for NXT Championship between Adam Cole, Finn Balor, Johnny Gargano and Tommaso Ciampa. The match ended with 2-2 draw between Adam Cole and Finn Balor, hence these two athletes fought tonight for NXT championship. Finn Balor gave massive 1916 DDT from the top rope to Cole to become the third wrestler in black and gold brand to become two-time NXT Champion. Apart from this, we saw Mercedes Martinez and Rhea Ripley battle out against each other in a steel cage match. The Nightmare made use of the Kendo stick to fight off not only Mercedes but also Robert Stone, who attempted to climb his way over the cage and into the ring. The catchy moment of the match was when Ripley blocked Martinez's potential super plex attempt to deliver a riptide in gigantic fashion from the second rope through a table to stand tall as the winner of The Battle of The Badasses. WWE News: Keith Lee's Plea to Drew McIntyre, AEW Dynamite Offer Details for AJ Styles, And Other Interesting Updates You Need to Know.

Adam Cole & Finn Balor Pay Respect to Each Other

The Prince Has His Kingdom

The Prin❌e of #WWENXT has taken back his kingdom! @finnbalor once again holds the #NXTTitle! #SuperTuesdayII

Fans will now eagerly wait for the upcoming Wednesday episode of NXT on Sept 16 where Damian Priest will defend his NXT North American title against Timothy Thatcher. Io Shirai will defend her NXT Women's title against Shotzi Blackheart, while Breezango will face Imperium for Tag Team championship.

(The above story first appeared on LatestLY on Sep 09, 2020 10:30 AM IST. For more news and updates on politics, world, sports, entertainment and lifestyle, log on to our website latestly.com).