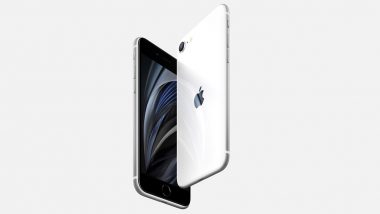 Targeting Android mid-segment users as well as aspirational iPhone seekers, Apple brought the new iPhone SE to India, that looks like Apple iPhone 8 with the power of iPhone 11, to the India market for just Rs 42,500. Apple iPhone SE 2020 Likely To Become Cheaper in India: Report.

"New iPhone SE packs our most powerful chip into our most popular size at our most affordable price and we're excited to be making it in India for our local customers," Apple said in a statement.

The new iPhone SE is being assembled by Apple supplier Wistron at its Bengaluru facility.

With this, the Cupertino-based tech giant that became the first US company to cross the $2-trillion mark last week, is now assembling four high-selling iPhones in India: iPhone 11, iPhone XR, iPhone 7 and new iPhone SE.

According to Navkendar Singh, Research Director, Client Devices and IPDS, IDC India, the new iPhone SE is finding good traction in the India market, primarily because it is a new iPhone from Apple at an attractive price point.

"Given its attractive price point and expected price aggression by brands and channels (online platforms) during the next few festive months, we should see the new iPhone SE to further find good traction in next few months," Singh told IANS.

Also, a small set of consumers still prefer a smaller pocket-sized phone and "there are not many such options in the market where phones are getting bigger in size".

The HDFC Bank has a cashback offer which brings the price of new iPhone SE further down to Rs 38,900.

Apple started assembling iPhones in India in 2017. Currently, iPhone XR and iPhone 11 are being assembled by Foxconn at its Chennai plant and iPhone 7 and new iPhone SE by Wistron in Bengaluru.

Original iPhone SE and iPhone 6s were assembled by Wistron but those were discontinued in 2019.

According to Prabhu Ram, Head- Industry Intelligence Group (IIG), CMR, with the iPhone SE 2020, Apple has added a new chapter to its rather impressive India growth story.

With a 4.7-inch Retina HD display, Touch ID, A13 Bionic chip that enables great battery life and the best single-camera system, the new iPhone SE is a powerful and compact new smartphone.

In the latest earnings call with analysts, Apple CEO Tim Cook said that iPhone revenue grew 2 per cent in the June quarter and the company witnessed a strong iPhone SE launch amid great customer response.

"The combination of the smaller form factor and an incredibly affordable price made the iPhone SE very popular. iPhone 11 is still the most popular smartphone, but iPhone SE definitely helped our results," Cook said.

(The above story first appeared on LatestLY on Aug 24, 2020 11:51 AM IST. For more news and updates on politics, world, sports, entertainment and lifestyle, log on to our website latestly.com).