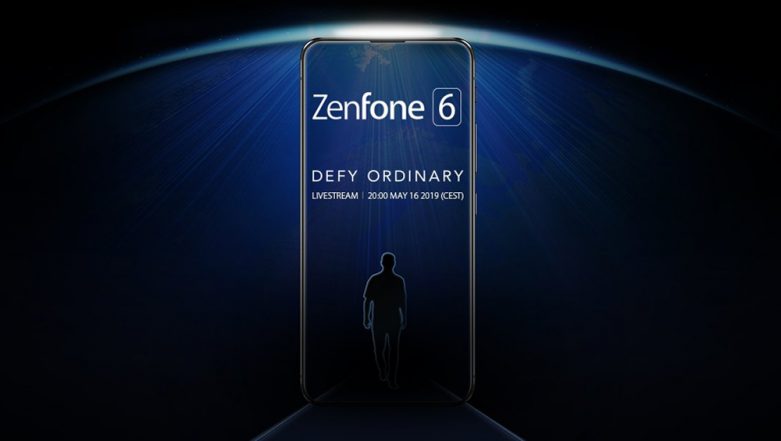 Asus Zenfone 6 To Be Unveiled on May 16 in Spain (Photo Credits: Twitter)

With several smartphone makers focusing on new generation flagship devices, Asus too seems to be in the race of introducing its new flagship phone soon. The Taiwanese tech giant is ramping up a teaser campaign for the upcoming Zenfone 6, which will be unveiled on 16th May, 2019. The smartphone maker revealed a new teaser image of the upcoming flagship smartphone on its official Twitter account. The smartphone will go official by mid-May at a special event in Valencia, Spain. OnePlus 7 Pro Pre-bookings Now Open in India at Rs 1,000 via Amazon.in.

Going by the official Tweet, the company has teased the arrival of the phone with a tagline - 'Defy Ordinary'. The teaser image clearly hints that phone will sport notchless and bezel-less display. Amazon Summer Sale 2019: OnePlus 6T 8GB RAM Variant Now Available At Rs 32,999 For Prime Members.

Previously, the FCC listing revealed that the upcoming Zenfone 6 smartphone will be packed with a dual rear camera system wherein the primary sensor will be a 48MP resolution. To be introduced as dual-SIM version, the phone is also expected to support a 18W fast charging. Asus Zenfone Live L2 Entry-Level Smartphone Unveiled; Gets Bigger 5.5-inch HD Display & New Gradient Colours.