Despite a strong track record with his other business ventures, tech honcho Bill Gates said that Tesla and SpaceX CEO Elon Musk could potentially make the micro-blogging site Twitter a 'worse' platform. 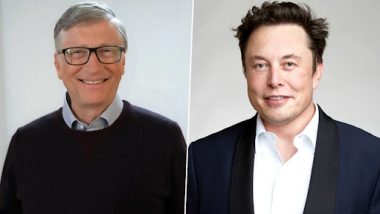 San Francisco, May 6: Despite a strong track record with his other business ventures, tech honcho Bill Gates said that Tesla and SpaceX CEO Elon Musk could potentially make the micro-blogging site Twitter a 'worse' platform. According to CNN, Gates sounded a note of caution on Musk's $44 billion takeover deal of Twitter, saying Musk "actually could make it worse".

While Gates did not precisely define what he meant by "worse" in remarks at the Wall Street Journal's CEO Summit, he questioned whether Musk is committed to preventing the rapid spread of public health misinformation and vaccine skepticism on social media. Elon Musk Buys Twitter Funny Memes Go Viral! Check Netizens Go Bonkers Sharing Hilarious Jokes and Puns That Will Crack You Up.

"How does he feel about something that says vaccines kill people, or you know, that Bill Gates is tracking people -- is that one of the things he thinks should be spread?" Gates was quoted as saying.

"If all you need is money and hiring great engineers, he is probably as good a person as any" to guide Twitter through its next chapter, Gates added, but said he does not expect Musk to replicate Tesla and SpaceX's "mind-blowing" performance.

Public attention has zeroed in on Gates' relationship with Musk in recent weeks after Musk tweeted an unflattering picture of Gates and accused him of shorting Tesla's stock, the report said.

On Wednesday, Gates said that Musk's tweeting "doesn't bother me" and declined to say whether he has bet against Tesla. "It's possible that the stock went down and whoever shorted the stock made money, I don't know," Gates said.

"Did it go down in the last month? I don't know. I don't think whether one is short or long Tesla is a statement about your seriousness about climate change. I am putting billions of dollars into climate change innovation; I applaud Tesla's role in helping with climate change," he added.

(The above story first appeared on LatestLY on May 06, 2022 05:04 PM IST. For more news and updates on politics, world, sports, entertainment and lifestyle, log on to our website latestly.com).