Google has told its suppliers to double the production of its upcoming Pixel 6 smartphones from last year to more than 7 million units, the media reported on Tuesday. 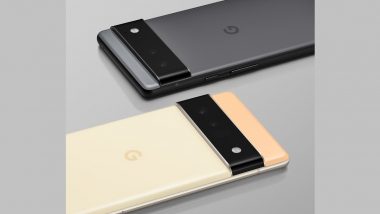 "Google has been telling suppliers since earlier this year that its position as the only US maker of Android smartphones will help it boost business at home, in Europe and Japan," the report mentioned. Apart from smartphones, Google is working on a new generation of the Pixelbook notebook computer that runs on Google's ChromeOS, it added.

According to reports, the new Pixel handsets will be updated all the way up to Android 16 in 2025 and receive security updates until October 2026. In terms of specifications, both Pixel 6 and Pixel 6 Pro may share the same main, ultrawide camera. The devices is likely to come with a 50MP Samsung GN1 main camera and a 12MP Sony IMX286 ultrawide camera.

The Pro model may have a 48MP Sony IMX586 telephoto camera sensor with 4x zoom support. For selfies, the vanilla Pixel 6 will have an 8MP sensor, whereas the Pro model will come with a 12mp Sony IMX663 sensor. The Pro model's front camera will offer two zoom levels: 0.7x and 1x.

The Pixel 6 Pro is tipped to feature a display panel with a resolution of 1,440x3,120 pixels and 120Hz refresh rate. The smartphone is expected to come preinstalled with a digital car key application. Under the hood, the smartphone will come with a Tensor chipset, paired with Mali-G78 GPU, and up to 512GB of storage.

(The above story first appeared on LatestLY on Oct 19, 2021 09:17 PM IST. For more news and updates on politics, world, sports, entertainment and lifestyle, log on to our website latestly.com).