When Apple first introduced digital car keys in 2020, iPhone users were able to share them via iMessage, Apple's instant messaging service, according to the report. 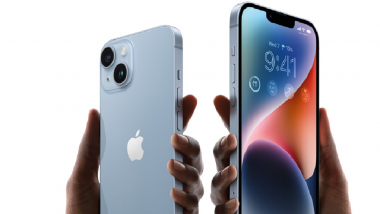 San Francisco, December 2: Apple has announced that iPhone users can now share car keys in the Wallet app with non-iPhone users, starting with Google Pixel devices. With iOS 16.2 software, users will be able to share digital car keys with non-iPhone users. According to TechCrunch, the company said that this capability will extend to other devices with Android 12+ in the future.

The company added that it has been working with the Internet Engineering Task Force and other industry players to establish a standard for sharing digital keys across platforms. The digital car keys can be shared via email, text message and WhatsApp. Emergency SOS via Satellite Feature in Apple iPhone 14 Saves US Man's Life Afer He Stranded in No Connectivity Area.

When Apple first introduced digital car keys in 2020, iPhone users were able to share them via iMessage, Apple's instant messaging service, according to the report.

According to an Apple post, digital car keys can usually be added to the Apple Watch (Series 5 or later or the Apple Watch SE) with the latest version of watchOS. Apple CEO Tim Cook Ignores Questions on Protests Affecting iPhone Manufacturing Companies in China.

Apple's digital car keys are one of many features that allow users to carry less stuff around. Meanwhile, Apple also rolled out a new iOS 16.1.2 update for its devices, which includes significant security fixes and improves the reliability of the crash detection feature for iPhone 14 and iPhone 14 Pro users.

(The above story first appeared on LatestLY on Dec 02, 2022 07:00 PM IST. For more news and updates on politics, world, sports, entertainment and lifestyle, log on to our website latestly.com).