Apple CEO Tim Cook has ignored questions on violent protests in China which have hampered iPhone production at its key suppliers' factories in the country. 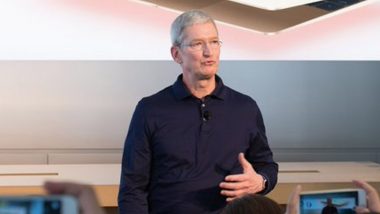 Washington, Dec 2: Apple CEO Tim Cook has ignored questions on violent protests in China which have hampered iPhone production at its key suppliers' factories in the country.

Cook refused to comment on whether he supported the Chinese people's right to protest and his thoughts on the factory workers beaten by authorities.

The Apple CEO also remained silent on whether he stood by his company's business dealings with the Chinese Communist Party.

Cook was in Washington to meet with Republican leaders this week, as the House Judiciary Committee will look into antitrust issues related to the App Store.

Under the update, iPhones can now only set their AirDrop to receive messages from "everyone" for 10 minutes before switching off.

The other settings allow for file-sharing between "contacts only" or "receiving off."

According to reports, the company has seen $165 billion in market value erosion since last week on concerns of weak holiday sales.

According to Apple analyst Ming-Chi Kuo, the shipments of iPhone 14 Pro and iPhone 14 Pro Max models will be between 15 million and 20 million units lower than expected.

(The above story first appeared on LatestLY on Dec 02, 2022 11:28 AM IST. For more news and updates on politics, world, sports, entertainment and lifestyle, log on to our website latestly.com).