Microsoft and Google have reportedly ended a six-year truce on legal battles, to prevent open warfare between the two tech giants. 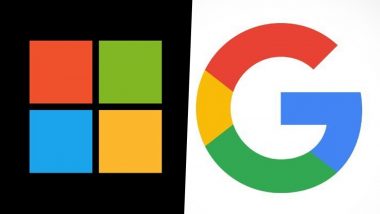 New Delhi: Microsoft and Google have reportedly ended a six-year truce on legal battles, to prevent open warfare between the two tech giants. The two companies reached an unusual pact in 2015 to end a running legal battle, forged soon after Sundar Pichai became the CEO of Google and Satya Nadella as CEO of Microsoft. Google Messages to Soon Auto-Delete OTPs & Sort Messages Into Categories in India.

According to Financial Times, ending the six-year truce will pave the way "for direct conflict as regulators take aim at barriers to competition among the leading US technology groups". The pact has expired in the middle of April and the two sides decided not to renew it, the report said, citing sources.

The gloves appear to be off once again between Microsoft and Google. Earlier this year, Google criticised Microsoft for trying to "break the way the open web works" and Microsoft publicly supported a law in Australia that forced Google to pay news publishers for their content. Microsoft also slammed Google's control of the ad market.

"The decision to let it lapse came as regulators around the world seek to challenge practices that may have entrenched the leading tech companies and prevented more open competition," the report mentioned.

In one of its most dirty tricks, Microsoft allegedly ran a series of attack ads called "Scroogled" that accused Google's privacy policies. The pact between Microsoft and Google was supposed to improve cooperation between the two companies but it did not work out that way. Microsoft has turned to Amazon instead to get Android apps running on Windows 11.

(The above story first appeared on LatestLY on Jul 01, 2021 11:35 AM IST. For more news and updates on politics, world, sports, entertainment and lifestyle, log on to our website latestly.com).