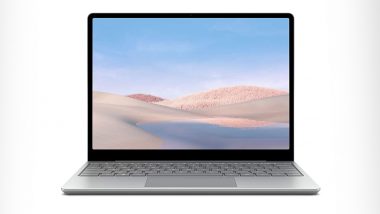 The Surface Laptop Go line is Microsoft's budget-friendly Surface Laptop, and it is said to be one of the best Surface PCs for students because of its premium design and small overall form factor, the report said.

(The above story first appeared on LatestLY on Apr 14, 2022 02:58 PM IST. For more news and updates on politics, world, sports, entertainment and lifestyle, log on to our website latestly.com).