PUBG Mobile Game Brings Baahubali Inspired 'The Great Indian Warrior' Outfit; Can Be Purchased With Discounts Till May 15 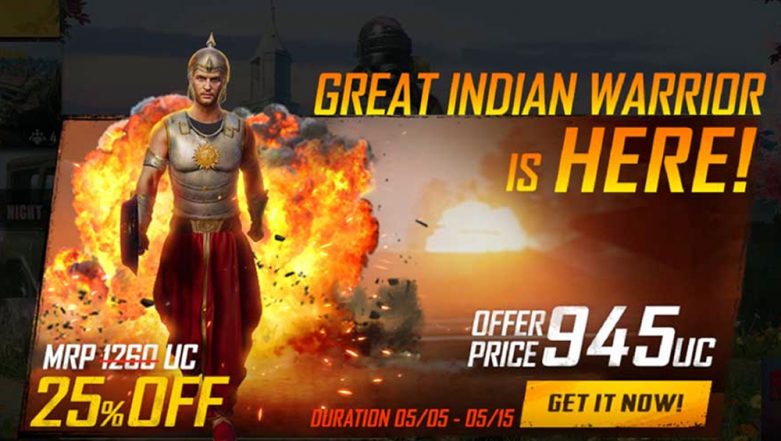 With an aim to attract more Indian audience, PUBG Mobile reportedly introduced Baahubali-inspired 'The Great Indian Warrior' outfit into the game. We already know that the online game brings wide range of outfits, accessories, skins and other customisations for the players. The latest addition seems to be straight from the sets of Baahubali, which is offered for 945 UC as a part of promotional offer giving a discount of 25 percent. PUBG, MOMO Now Legal in Gujarat's Rajkot; Ban Lifted by Police.

The new inclusion comes in two sets, which includes the armoured Baahubali-inspired outfit and a headgear. The interested buyers can purchase either of them from the 'shop' section by paying 300 UC for headgear and 900 UC for the armoured outfit. There is also a promotional offer wherein you can purchase new headgear and outfit for 945 UC. This Indian Warrior outfit offer pops-up immediately when a user load into the game.

It is important to note that this is not the first time that PUBG Mobile is offering special outfits exclusively for the Indian users. To recall, we saw a special kurta Pyjama set on the occasion of Diwali, which was a special white outfit with colour splashes. The game also brought cricket jersey for promoting the 12th season of Indian Premier League. PUBG Ban: 40% Indians Support Complete Ban on PlayerUnknown’s Battlegrounds, Cigarettes, Marijuana and Online Betting.

Moreover, the inclusion of the 'The Great Indian Warrior' doesn't seems to be an official collaboration and the outfit has a similarity to the costume put on by the character -Baahubali. We also saw Resident Evil inspired content on the gaming platform, which was added as a part of collaboration. An exclusive in-game costume was also introduced after the company joined hands with Japanese clothing brand - A Bathing Ape, popularly known as BAPE.