Qualcomm is reportedly working on an Android-powered, handheld gaming console similar to the popular Nintendo Switch. The gaming device is likely to include a large 6000mAh battery, equipped with the company's Quick Charge technology. 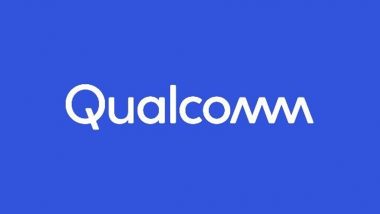 San Francisco, March 24: Qualcomm is reportedly working on an Android-powered, handheld gaming console similar to the popular Nintendo Switch. As per a report by Android Police citing sources, the Qualcomm device will have detachable controllers like the Joycons on Nintendo's handheld console. Qualcomm is said to be targeting a price of around $300 for its gaming console. Qualcomm Snapdragon 480 5G Chipset for Affordable Smartphones Announced.

The gaming device is likely to include a large 6000mAh battery, equipped with the company's Quick Charge technology. Qualcomm is using a "premium supplier in the controller space to design and manufacture the gamepads."

In addition, the Qualcomm device is said to have detachable controllers on each side. These controllers are said to be designed and manufactured by a big name in the controller industry. More specifically, it will likely be running a custom version of Android 12.

Like the Nintendo Switch, Qualcomm's portable may support display-out capabilities to play on an external TV or monitor. Nintendo Switch was the best-selling hardware platform in units and dollars for both December and the 2020 year in the US. Annual dollar sales of Switch hardware were the second highest for a platform in the US history. Half of the top 20 best-selling games of December were published by Nintendo.

(The above story first appeared on LatestLY on Mar 24, 2021 09:49 PM IST. For more news and updates on politics, world, sports, entertainment and lifestyle, log on to our website latestly.com).