15-year-old climate change activist, Greta Thunberg is on a two-week voyage to the United States from the United Kingdom. She will leave Plymouth, England for New York in a high-tech but low-comfort sailboat. 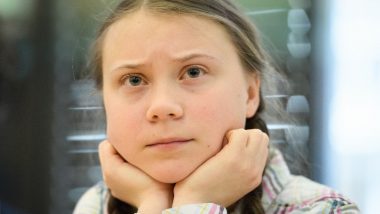 15-year-old climate change activist, Greta Thunberg is on a two-week voyage to the United States from the United Kingdom. The girl has inspired students of her age around the world to question their governments on climate change and demand immediate action. Now, the Swedish activist will be attending UN summits in New York and Chile on tackling global warming. And for which the environmental activist will set sail today from Plymouth on a carbon-neutral yacht. She will leave Plymouth, England for New York in a high-tech but low-comfort sailboat. The racing yacht is a 60ft Malizia II, a zero-carbon vessel, with solar panels and underwater turbines to generate zero-carbon electricity on board. Who Is Greta Thunberg and Why Has She Been Nominated for the Nobel Peace Prize?

Last month, the young girl said that she would not fly to environmental conferences and wanted to find a way to reach the destination without affecting the planet. Greta Thunberg told The Associated Press, "It's not very luxurious, it’s not very fancy but I don't need that. I need only a bed and just the basic things."So I think it will be fun, and I also think it will be fun to be isolated and not be so limited."

She will be speaking at the UN Climate Action Summit hosted by secretary-general Antonio Guterres in New York in September. Noe, she is taking a sabbatical from school and planning to visit Canada and Mexico before going to the UN climate conference. She will be going to these places by train and bus. Climate Change Demands Action! Children Across 30 Countries to Skip School on March 15 for a Protest.

Thunberg will be accompanied on the two-week journey by a filmmaker, her father Svante and Pierre Casiraghi, the grandson of Monaco's late Prince Rainier III and American actress Grace Kelly. Thunberg had garnered attention at the World Economic Forum in Davos when she told business and political leaders that they should panic, because "our house is on fire".

On Tuesday it was announced that the teen will be honoured at this year's GQ Men Of The Year Awards. She will receive the Game Changer Of The Year Award, that has been specially created for her. GQ chiefs say that the new gong "recognises Thunberg's dedication to raising global awareness of climate change". #StudentStrike4ClimateChange Trends As Indian Students Inspired by Nobel Peace Nominee Greta Thunberg Protest Against Climate Change (See Pics and Videos)

Talking about the honour awaiting her, Thunberg said, "I am very grateful and this award is for everyone in the Fridays For Future movement, everyone whose school is striking for the climate. We all deserve this award because together we have accomplished so much. So thank you to everyone who has been school striking as well."

(The above story first appeared on LatestLY on Aug 14, 2019 02:33 PM IST. For more news and updates on politics, world, sports, entertainment and lifestyle, log on to our website latestly.com).