Who Is Greta Thunberg and Why Has She Been Nominated for the Nobel Peace Prize?

Greta Thunberg, a 16 year-old from Sweden has started a student movement calling for climate change mitigation action which has won her a nomination for this year's Nobel Peace Prize. 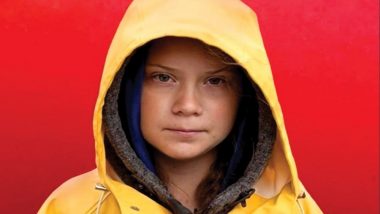 Toronto, March 15: 16 year-old Greta Thunberg from Sweden has become the face of a student protest movement calling for climate change mitigation action. Her activism has won her the nomination for this year’s Nobel Peace Prize.

Thunberg was nominated by three Norwegian MPs who said, "We have proposed Greta Thunberg because if we do nothing to halt climate change, it will be the cause of wars, conflict and refugees," Norwegian Socialist MP Freddy Andre Ovstegard told AFP news agency. "Greta Thunberg has launched a mass movement which I see as a major contribution to peace," he added.

Honoured and very grateful for this nomination ❤️ https://t.co/axO4CAFXcz

Greta began walking out of her classes every Friday since August last year to protest against the lack of action on climate change. She staged a protest outside the Swedish Parliament and began campaigning on social media under the hashtag #FridaysforFuture to demand that leaders enact climate change mitigation laws. Her movement has caught on in other European countries with school students staging protests in the UK, Germany, Belgium, France, Australia and Japan.

Tomorrow we school strike for the climate in 1769 places in 112 countries around the world. And counting.

Everyone is welcome. Everyone is needed. Let’s change history. And let’s never stop for as long as it takes. #fridaysforfuture #schoolstrike4climate #climatestrike pic.twitter.com/xpCLQN8icv

Greta was invited to speak at the World Economic Forum in Davos where she categorically told global leaders, "On climate change, we have to acknowledge that we have failed”.

(The above story first appeared on LatestLY on Mar 15, 2019 01:41 AM IST. For more news and updates on politics, world, sports, entertainment and lifestyle, log on to our website latestly.com).