Climate Change Demands Action! Children Across 30 Countries to Skip School on March 15 for a Protest

High-school and middle-school students in more than 30 countries will join the strike demanding politicians to treat the global climate change crisis as an emergency situation. 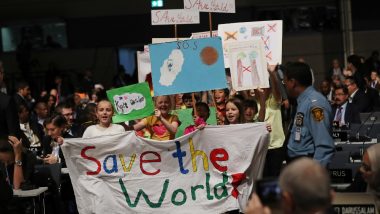 Thousands of New Zealand school students are planning to skip school on March 15 for a strike on climate change. High-school and middle-school students in more than 30 countries will join the strike demanding politicians to treat the global climate change crisis as an emergency situation. 'School Strike 4 Climate' will ask authorities to implement Green New Deal championed by Congresswoman Alexandria Ocasio-Cortez. The children's support has received the support of politicians too.

Leo Eric Varadkar, Irish politician said, "I am inspired and enthused by the fact that young people, students and school pupils are taking a real interest in climate action, that they are going to protest and that they are putting it up to all of us in all parties, and to all adults, to do more when it comes to climate action." Climate Change To Worsen Your Health, Warn Doctors: Here’s How Global Warming Will Affect Human Lives.

Last month, pupils from around the UK went "on strike" as part of a global campaign demanding action on climate change. Reportedly, protests took place in more than 60 towns and cities, with estimated participants of 15,000 pupils. They had carried placards which read 'There is no planet B'. Here Are 5 Biggest Threats to Our Oceans and Marine Life!

It began after 15-year-old Swede Greta Thunberg skipped class to sit outside government buildings in last year, accusing her country of not following the Paris Climate Agreement. Since then protests by children have taken place in countries including Belgium, Germany, Sweden, Switzerland and Australia. Cities like London, Brighton, Oxford and Exeter have seen some of the biggest protests. On December 16, Greta attended a UN Climate summit in Poland in which held world leaders responsible for not acting on the current situation. 4 Truths That Make Us Wonder Whether The Earth Will Survive 50 Years From Now.

Watch her speech at the UN here:

She repeated the same attack on politicians at World Economic Forums' annual gathering in Davos, Switzerland.

In the US, Europe, and Australia, students are skipping school most Fridays to attend the protest requesting for a better future. This January 24 around 32,000 students took the streets demanding urgent change in Brussels. Talking about children's participation, a New Zealand Minister Phil Twyford said it was great to see young people getting involved in issues like climate change because "if there's one issue that's going to affect the next generation it's climate change".

(The above story first appeared on LatestLY on Mar 06, 2019 12:16 PM IST. For more news and updates on politics, world, sports, entertainment and lifestyle, log on to our website latestly.com).