Students from schools in Delhi and Mumbai missed classes on Friday joining the 'School Strike 4 Climate'. 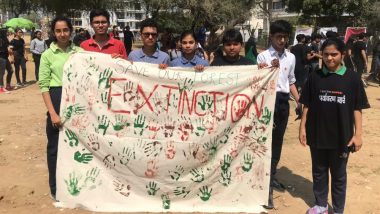 Protesting against climate change, students from countries around the world have skipped schools and taken to streets demanding immediate action from authorities. In New Zealand, hundreds of young people marched carrying placards highlighting the effects of climate change on Earth. In India, school children from Delhi and Mumbai also missed classes on Friday joining the 'School Strike 4 Climate'. Children began to take to streets demanding a better future after  16-year-old Greta Thunberg skipped her class to sit in front of parliament in Stockholm last year.

Her step inspired students around the globe to do similarly pressing on how climate change will affect future generations. Her action recently won her the nomination for this year's Nobel Peace Prize. Pictures and videos of school children protesting in public places are being widely shared on social media with the hashtag #StudentStrike4ClimateChange, #ClimateStrikeIndia #ClimateStrike and #FridaysForFuture. Students in Boston, Bogota, Dhaka, Durban, Lagos, London and different cities participated in the event. Climate Change Demands Action! Children Across 30 Countries to Skip School on March 15 for a Protest.

We should stand against #climatechange . That's the message of this boy.

Thousands of young #ClimateChange activists in at least 112 countries including #India skipped school today for a #ClimateStrike what may be is one of the biggest environmental protests in global history. Here is what happened in #Gurugram #NoSaansNoVote pic.twitter.com/ZLfc9tGgQM

Earlier too students in New Zealand have taken to roads demanding actions from world leaders for future generations. High-school and middle-school students in more than 30 countries are participating in the event today.

Similar protests have taken place in the past in Belgium, Germany, Sweden, Switzerland and Australia.

Children have marched down streets in cities like London, Brighton, Oxford and Exeter demanding a better future for themselves from elders who have the decision making power. Greta at UN Climate summit held in Poland last year held world leaders responsible for not taking required actions.

Students in the United States, Europe and Australia are skipping school on Fridays to attend the marches.

This young girl makes it clear. They worry about their future..

Earlier on January 24 this year, around 32,000 students took out a similar protest in Brussels.

So many young leaders for the climate movement have emerged!

Need of the hour!

History is being made !!

New Zealand Minister Phil Twyford said it was great to see young people getting involved in issues like climate change because "if there's one issue that's going to affect the next generation it's climate change". However, some schools are not supportive of students' involvement in such events saying their attendance cannot bring change. However, students across the world continue to get inspired by Greta's approach and there has been an increase in students attending the event.

(The above story first appeared on LatestLY on Mar 15, 2019 04:58 PM IST. For more news and updates on politics, world, sports, entertainment and lifestyle, log on to our website latestly.com).