Loch Ness Monster is Still A Mystery But Could be a Humongous Eel, Claim New Zealand Scientists 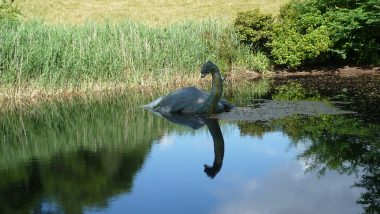 The Loch Ness Monster is currently the greatest unexplained mystery in the United Kingdom. Despite numerous sightings over the years, there is still no proof if Nessie exists. To those who are puzzled as to how the Loch Ness would plausibly look like, if at all it is real, New Zealand scientists might have the answer for you. According to a new study reportedly conducted by researchers at the University of Otago, Nessie could be a humongous eel. In one of the biggest DNA studies of its kind, the team found about 3,000 species in the deep murky water of the Scottish loch. Loch Ness, Bunyip, Yeti and Some Folklore Beasts That 'Apparently' Exist and Where You Can Find Them!

Published on Loch Ness Hunters’ website, the study stated no direct evidence of Nessie but many discoveries. The researchers’ collected a large amount of DNA from land-based species in the Loch system. No shark or catfish, but it matched with a giant eel. “Are they giant eels? Well, our data doesn’t show their size, but the sheer quantity of the material says that we can't discount the possibility that there may be giant eels in Loch Ness,” reads the study.

Here Are the Highlights of the Recent Findings:

According to research, Nessie was first spotted back in 565 that described it as a giant “water beast” dragging a man to his death in the Scottish lake. However, a broader interest in the monster was sparked in 1933 after a road was built along the loch, making it less isolated. Over the years, many sightings of Nessie was headlined, but nothing could prove if it is actually Loch Ness Monster. Last year, a girl on her holiday was reported to have captured so far the “best picture of Nessie”. Again this year in June, a zoologist named Dr Darren Naish from the University of Southampton denied all such sightings and claimed that the river monster might not exist at all.

(The above story first appeared on LatestLY on Sep 06, 2019 11:05 AM IST. For more news and updates on politics, world, sports, entertainment and lifestyle, log on to our website latestly.com).