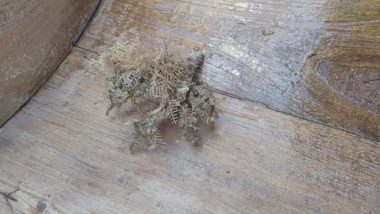 The deep blue ocean is full of mystery. There are so many species of living beings and underwater creatures that exist and while our scientists may have listed down thousands of those, there are still many which are not reported. Now some local fishermen on the island of Koh Yao Noi in Phang Nga in Thailand found a mysterious creature in their net. The unknown creature was caught in their net of crabs. The fishermen released it into the boat and the marine creature which looked like carrying some sea grass on its body was seen moving around fast on the wooden surface. A video of this mysterious creature has come up. Are These The Weirdest Sea Creatures Ever Seen? Russian Photographer Shares Underwater Pictures from Atlantic and They Are Creepy!

The deepest underwater carries many of nature's secrets, some of those which are far away from the realms of science to encounter. This particular marine animal is actually camouflaging with its background and has some stick like structure to it. Its body structure matches to a crab with a shell-like covering and claws. The animal seems to have stuck from dry seaweed to it unless it is its natural covering. Headless Chicken Monster Filmed in Antartica Ocean for the First Time, Watch Video of the Weird-Looking Sea Cucumber.

It does look a little creepy right? Not much is known about this creature yet. But this finding once again shows how the marine life is still more vast than we know. This is also not the first unknown creature that has been spotted by locals. Residents living near a beach in New Zealand had found a skeleton of a strange creature some months ago. People even thought of it to be alien. But it was later identified as a male Dipturus nasutus, a New Zealand rough skate fish. Let us wait to see if someone identifies the recent spotting at this island in Thailand.

(The above story first appeared on LatestLY on Jan 23, 2019 04:55 PM IST. For more news and updates on politics, world, sports, entertainment and lifestyle, log on to our website latestly.com).